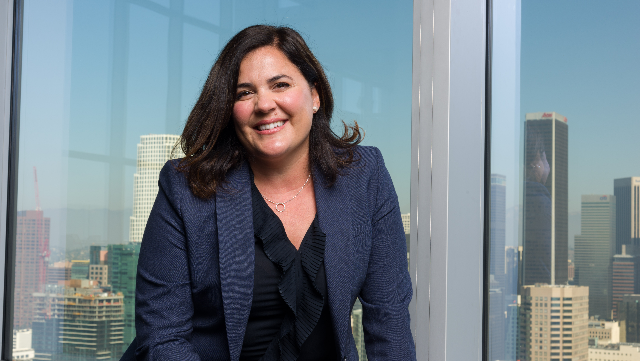 Luck really has nothing to do with where Michele Siqueiros is today. It was hard work, “really good teachers” and a group of UCLA college students who visited her high school to help the younger students apply to college and convince Siqueiros' mother to fill out the FAFSA financial aid forms that set her on the path to success.

Siqueiros is the president of the California‐based Campaign for College Opportunity, an organization whose singular focus is to have “more Californians go to college and graduate.” Founded in 2003 by Dr. Steve Weiner and Dr. David Wolf, former California academic administrators who wanted to keep access to college and the American Dream alive, the campaign seeks to ensure that other California students have the same chance Siqueiros did.

Siqueiros' mother emigrated from her native Mexico in the 1970s with only a sixth‐grade education, she had to leave three children behind. Settling in Los Angeles, Siqueiros' mother, who didn't speak English, although she understood it, worked as a seamstress. Siqueiros was born in the U.S.

Although her mother was “incredibly supportive,” Siqueiros says she was also strict. In a neighborhood full of dangers, the young girl couldn't play outside, so she turned to books for entertainment.

With the current administration's demonizing those who immigrate to seek a way out of poverty, violence and drug dealing, Siqueiros notes that her mother “is the epitome of things we value.” “I feel like she's a model of strength and courage,” she says, while also admitting her mother would disagree with the assessment.

Given the environment in which Siqueiros grew up, it was pretty obvious to her that without a college education, the type of jobs she would have access to were not the jobs she wanted to do. “A lot of my relatives made it very clear that if you get an education, you won't have to work with your hands,” says Siqueiros.

Admitted to her dream school, the University of California, San Diego, Siqueiros instead enrolled at Pitzer College CA, one of the Claremont schools, which she saw for the first time on move‐in day. The financial aid package made Pitzer even more affordable than UCSD.

“The sticker price is often not the real price you have to pay,” Siqueiros says, something she tells her friends' children. She would go on to earn a bachelor's degree in political studies with honors and in Chicano/a studies.

Siqueiros later earned a master's degree in urban planning from UCLA. “I was always interested in the power of policy to create opportunity or take it away,” she says.

Siqueiros soon went from being one of the smartest kids in her high school class to not understanding her first college lecture. She struggled with one of her first assignments, reading a set of papers and writing her own based on them.

“I didn't even get a grade,” she says. The professor called her into his office and, after discussing the readings with her, asked her to redo the paper.

He also told her that if she had trouble with future readings to come in and discuss them with him. “Pitzer was a small environment that was so nurturing and that didn't presume I wasn't smart enough to succeed,” she says.

Siqueiros applies those firsthand experiences to her work with the campaign. The campaign collects and analyzes data to develop policy and to advocate and advance policies that help students.

It also produces research to support its policies as well as inform Californians about the importance of higher education and the crisis it faces. Its singular focus is to convince policymakers and funders to live up to the idea that everyone should have an equal opportunity to go to college and succeed.

Co‐founded by the California Business Roundtable, the Community College League of California and the Mexican American Legal Defense and Educational Fund, the campaign has an unlikely alliance of supporters. But the alliance makes perfect sense when viewed from the perspective of its goals—to improve college‐going and graduation that leads to improved economic conditions for California.

Under her leadership, the campaign helped pass legislation to eliminate placement tests and have two‐year colleges rely on high school GPAs for admission. Through the Transfer Pathway Reform, the campaign made it easier for students in California community colleges to transfer to any California State University campus.

The campaign also distributed a report on the state of Latinx in California. Future analyses will address the state of black, native and Asian students.

During the recent election, Siqueiros had conversations with the Democratic candidates for governor and lieutenant governor. That ability to connect with the state's top political leaders “speaks to the influence we now have [and] the stature we've built,” she says.

Higher education lacks a diverse environment for women of color, even in California. Both the UC Board of Regents and much of the state's governing bodies are composed of older, white males.

“I represent a completely different demographic,” says Siqueiros. “Often I'm the only Latina in the room.”

She's also often the youngest. Rather than see those characteristics as a hindrance, she embraces them.

“I have really loved being underestimated,” she says. “It's the best feeling when you get something done and [initially] have been dismissed.”

Correction, March 1, 2019: The previous version of this article stated that Siqueiros emigrated from Mexico, when in fact, she was born in the U.S. Our apologies.