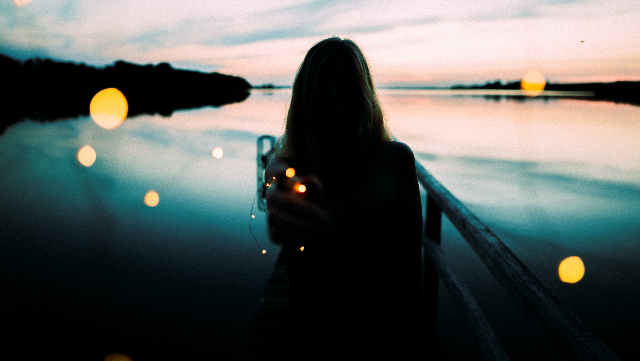 On my desk is one of those clichéd felt boards with white plastic letters graced with inspirational quotes. Right now, my board reads, “Your silence will not protect you.” It's a quote from Audre Lorde's essay “The Transformation of Silence into Language and Action” (1978). Reading that essay and that quote years ago fundamentally changed how I understood the power of speaking up and out and helped me to understand that our silence is a burden, not protection.

Lately, I have returned to Lorde's essay. I find that I need to remind myself that adopting silence won't protect me from all the people, mostly men, who have hurt me, nor will silence erase the trauma I've endured at their hands. Silence, she reminds me, doesn't do us any good. It can devour us from the inside out. We all have the hard things to say about the common horrors of our world and the somewhat easier things to proclaim, like joy, hope, happiness and possibility.

And yet, women's voices—what we say and what we name—are downplayed, derided, contradicted, ignored or shouted down. In her famous essay “Men Explain Things to Me” (2012), Rebecca Solnit writes, “Credibility is a basic survival tool.” And yet, she says, women routinely appear as neither credible nor as “reliable witnesses to their own lives.” Women aren't believed because “the truth is not their property,” she writes. The truth becomes the property of men, mostly white men.

Our white supremacist patriarchal culture marks women, all women, as lacking credibility, as untrustworthy and as inherently unbelievable. Men's stories—their takes, their memories, their emotions (especially their anger) and the values of their lives—still hold more weight. Men matter; women don't. The message resounds loud and clear as I watch and listen to the news; scroll through social media and see men and women challenge women's ability to speak truth; and hear men speak about women when they think women aren't paying attention. We women can whisper, tweet and shout our stories, but we still aren't believed.

It's heartbreaking that our culture doesn't believe women. I wonder if our culture will ever even want to. Believe women, I write again and again, because so many people still need to be convinced.

Our silence might not protect us. But speaking out doesn't necessarily protect us either. Our stories aren't believed. Our words are challenged, attacked, ignored or pushed aside. We can speak, but there's no guarantee we will be heard. #MeToo encouraged us to speak aloud our painful truth, but still folks refuse to listen. Silence becomes appealing, even as it's too much to bear. If we don't speak up, how do we live with ourselves? If we do speak up, how do we live with not being heard?

I pose these questions, not rhetorically, but as someone who thinks carefully about both my silences and confessions. I'm committed to speaking out, but silence appeared safer than sharing my own stories of abuse, trauma, harassment and harm. Recently, I told my therapist that I know the allure of silence and the comfort of pretending to be normal. I learned early on that if I don't speak what happened, then I can pretend nothing did. If I remain silent about all the terrible things that happened to me, I don't ever have to worry about being believed. I know my truth; I don't need your doubt or accusations.

Yet, as I speak out more, I still worry about being believed. Because, throughout my life, I was told that I wasn't believable. I never reported my biological father, who emotionally and mentally abused me, because he told me no one would believe me. As a child and later a teenager, I knew he was right. I never reported the grad student who sexually harassed because I knew my department would believe him over me. When I finally did report men who harassed and bullied me in two departments, I was still not believed. Department chairs insisted that I must have been wrong, I must have lied or I must have misinterpreted what happened.

Over and over, men and women told me I wasn't believable, nor would I ever be. I took it to heart. I began to doubt the truth of my experiences. I learned the lesson that a woman's word doesn't matter as much as a man's does. A woman's life doesn't either.

When I finally wrote about my own #MeToo stories a few months ago for WIHE, I asked, “Would you believe me?” That question still haunts me. #MeToo shows the power of women's stories but also the dangers posed to those who speak up. The weight of the cultural expectations is overwhelming. I feel suffocated by the fact that somehow, because of my gender, I won't be believed. I keep saying, “Believe women, believe survivors” in the hopes we finally will.

“Believe women” remains a radical statement because it counters the idea that women are inherently unbelievable. Those two words require us to listen to women describe their experiences of harassment, assault and harm. All are disastrously common, and they don't have to be. Hear us and reckon with our trauma. Make believing women into a common practice. Show us that we matter too.