I'm With Her, Too 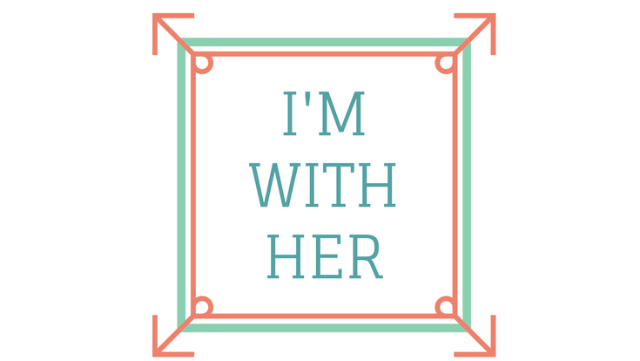 After I voted in the Florida primary at the end of August, my seven-year-old daughter cheerfully asked, “Did you vote for Hillary?”

“No,” I explained, “I can't vote for Hillary until November.”

“NOVEMBER?!” she yelled. “I can't wait that long. I just can't wait until November.”

“I'm having a hard time waiting too,” I told her in an attempt to reassure her that I would vote for Hillary but we had to be patient.

A little over two months later, I'm still having a hard time waiting for Election Day on November 8. However, my kiddo and I have different reasons for why this particular wait feels so long and difficult.

The reality of a woman president

My daughter can't wait to see if Hillary Clinton will become the first woman president. She's afraid of what will happen to her friends if the Republican nominee wins the election. She needs to know the results of the election right now, so she can go back to being concerned only with what's happening in second grade. The fate of the nation is too much burden for her small shoulders.

Not because she's a woman

But I'm not voting for Hillary solely because she's a woman. This is a common accusation, usually from men, that woman supporters of Hillary face in real life and online. Tweeting #ImWithHer leads to a whole variety of dudebros explaining that women are only voting for Hillary because of gender. How dare you vote for a woman if you are a woman, these men fume, how dare you! These men seldom acknowledge that men might have been voting according to their gender all along or that gender might even influence who they want to vote for right now.

But now, I'm voting for Hillary because she's the most qualified candidate for the presidency. Hillary cares about issues that I care about, including child care, paid leave and, importantly, pay equality, and also vows to defend Planned Parenthood and women's health care from recent attacks. She's the candidate who has long affirmed that “women's rights are human rights.” Other politicians have derided these as “women's issues.” But Hillary affirms that women are people too, so we deserve to be treated like we are. We deserve equality.

Her qualifications and her long-standing fight for women and children alone make me support her, so why am I ready for this historic election to be over?

I'm tired of the tenor of this election cycle. I'm weary of the sexist news coverage about Hillary's candidacy. The headlines suggest that a woman coming to work with pneumonia is feeble rather than strong. Pundits tell her that she doesn't smile enough or that she smiles too much. Some suggest that she overprepared for the debate, as if overpreparation is a problem we should all avoid (it's not, really).

I'm remarkably over the rampant sexism and casual misogyny that surrounds the first woman presidential nominee from a major political party. While I'm very well aware that sexism is alive and well (hello, editor of a feminist newsletter and long-time writer on the sexism beat!), the level of vitriol directed toward Hillary is a terrible thing to witness day in and day out. It is as if Clinton's candidacy gave men (and women) the excuse to declare their sexism publicly and unabashedly.

The double standards women face at work and home are laid bare in every snarky comment about Hillary's smile or qualifications. I can barely stomach it anymore.

The criticism and public scrutiny Hillary encounters is too intimately familiar. I've been told I'm overqualified for jobs I applied for, only to find out that men with disappointing CVs received the position. I've been told to smile more or less. I've gone into work while ill because I knew that if I didn't there would be professional repercussions. At work, men have interrupted, mansplained, raised their voices and threatened me to show me that my place was somewhere below theirs.

I'm ready to vote for Hillary because I understand her struggles and appreciate all she was able to accomplish in spite of them. I'm ready for a woman president. I hope our nation is too.