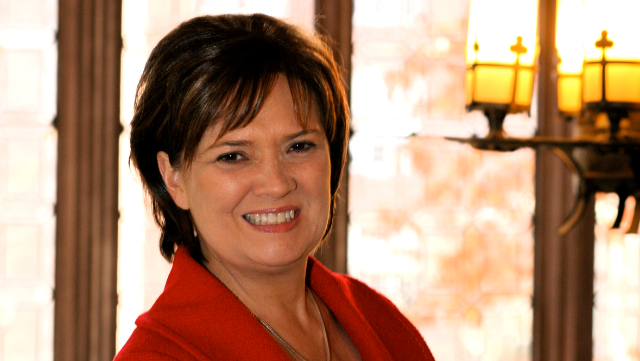 Now in her third year as president of the Association of American Colleges & Universities (AAC&U), Dr. Lynn Pasquerella brings not only an outstanding career in academia to the position, but also her perspective as a first‐generation college student who began her higher education journey at a community college.

“I loved my experience at each of the institutions I attended,” says Pasquerella, who earned her bachelor's degree at Mount Holyoke College MA and her doctorate at Brown University RI. “When I graduated with my PhD from Brown, I graduated with a deep and abiding commitment to providing access to excellence in higher education regardless of socioeconomic background, to the centrality of liberal learning and to the political scientist Benjamin Barber's notion of colleges and universities as civic missions.

“We're not only educating people to be free, but we're freeing them to be educable by serving as a visible force in the lives of the most marginalized, disenfranchised members of society,” she adds. “We need to do more to investigate the institutional barriers and structural impediments to not only creating access, but also to promoting student success.”

Life in the Academy

Pasquerella's research interests included medical ethics, metaphysics, public policy and the philosophy of law. She was drawn to a career in the academy right from her first philosophy course at Quinebaug Valley Community College CT where the professor posed fundamental questions about human existence.

“To do that in a classroom setting was a dream come true,” she says.

At the University of Rhode Island, Pasquerella rose from lecturer of philosophy to full professor. She also became vice provost for academic affairs and dean of the graduate school. Pasquerella then spent two years as provost of the University of Hartford CT before returning to Mount Holyoke in 2010, serving as the college's president for six years.

At Mount Holyoke, she was able to give back to a school that transformed her life. It was an especially interesting and wonderful experience to work alongside some of her college professors. But as much as she loved being back at her alma mater, Pasquerella felt an urgent call to action to defend liberal education, which brought her to the AAC&U.

“It was the right time to be doing this advocacy work at the national level,” she says.

Some of the most rewarding parts of her presidency thus far have been the recent projects around truth, racial healing and transformation (TRHT). Funded by the W.K. Kellogg Foundation and Newman's Own Foundation, there is an objective to create 150 TRHT centers at colleges and universities across the United States.

“Addressing the issues around polarization on college campuses,” says Pasquerella. “It's higher than it has been in 50 years. The work that we're doing with Eboo Patel and the Interfaith Youth Core, Speaking Across Religious Differences, and the work that we're doing around civic engagement and making sure that colleges and universities serve as anchor institutions is more critical than ever before.”

A recent round of employer surveys shows leaders and human resources managers want graduates who are able to work on diverse teams. The AAC&U can not only get the data out to the public, but also present it in ways that don't stigmatize those who are suspicious of the academy.

In addition to TRHT and Speaking Across Religious Differences, in the coming academic year the AAC&U will have new work on how to create assignments that foster students' abilities to solve real‐world problems. There is ongoing work on pathways to college success, including building support for military veterans, incarcerated individuals and other at‐risk populations.

The AAC&U represents 1,400 institutions and involves presidents, faculty and staff. Through the Presidents' Trust, which consists of presidents from all sectors of higher education, there is discussion of the challenges they're facing in their daily lives as related to the mission of advocating for liberal education, quality and equity. Pasquerella's background as a college president helps in creating an agenda around the types of dilemmas and distress presidents are feeling.

“There is increasing pressure on college presidents from boards who have little experience with shared governance and who want rapid change,” Pasquerella says. “That is juxtaposed against faculty who are change‐resistant and who fear the corporatization of higher education.”

It goes without saying the most serious challenge is finances. Dealing with this as well as day‐to‐day complex issues on all college and university campuses leaves most presidents little time to be thought leaders. By creating a means for presidents to come together, the AAC&U not only enables an exchange of best practices, but allows them to bolster one another in the hard work of educating for democracy.

Pasquerella says colleges and universities can take an even greater public stance on issues that have a profound impact on society.

“Colleges and universities should play a leadership role in encouraging faculty, staff, administrators and students to exercise their voices in the most critical ethical, legal and social issues of the day,” she says. “We need to create structures within the academy to reward that good work through the tenure and promotion process.”