A Home for New Beginnings 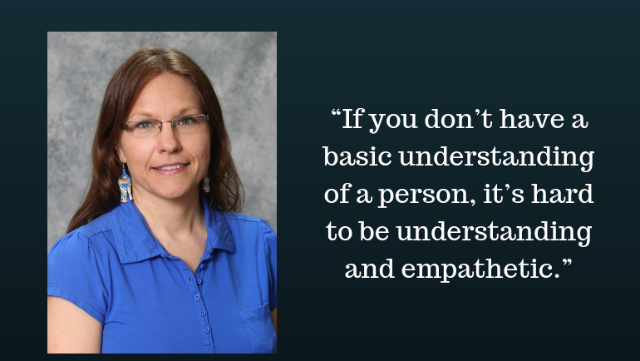 The stories of Native Americans taught in history books are generally incomplete or full of half‐truths and myths. Shana Harming plans to right some of those wrongs as the first leader of the Wokini Initiative at South Dakota State University.

Prior to being appointed to lead the initiative, Harming, an enrolled member of the Lower Brule Sioux Tribe, served as a research coordinator in SDSU's College of Nursing. There she developed information on living kidney donations and transplants, while earning her master's degree in counseling and human development.

“It's a nationwide issue, but particularly true in South Dakota,” she says of the stories. The general public isn't knowledgeable about Native history and they “don't understand the historical trauma that Natives have endured.

“They believe the myths that still perpetuate. The myths cause a lot of hard feelings.”

Native Americans have had to fight for citizenship and the right to vote even more intensely than African‐Americans did, Harming says. “If you don't have a basic understanding of a person, it's hard to be understanding and empathetic,” she says.

Native women face the double challenge of being both women and part of a minority. If we fight as women for our students and for equity, we're seen as being aggressive, says Harming.

If men do the same, they're considered passionate or engaged. Despite this being a well‐known phenomenon, no one ever changes their worldview.

Raised by a single mother who was a Native (her father, who was white, died three weeks after she was born), Harming says she had a “very strong connection” with her Native identity.

Because of her biracial identity, she doesn't resemble what people expect a Native person should look like. “I constantly have to educate people that I am Native,” says Harming.

Growing up, she lived both on and off the reservation. Acknowledging that the stereotype of reservation life “is something like a ghetto with trash in the yard,” Harming lived in ranching country along the Missouri River with her grandfather who was a rancher, and her upbringing was more idyllic.

After earning her bachelor's degree in psychology and secondary education at SDSU, Harming fully expected to become a guidance counselor. “My first job was on the Standing Rock Reservation,” she says. “I found my niche working with underprivileged youth.”

Later, Harming returned to school and got a special education certification. By this time, she had married; her husband, Mark, was also a teacher and a basketball coach.

The salaries of two high school teachers were not enough “to make ends meet.” So Harming left education and took a position with the Bureau of Indian Affairs as a child welfare specialist for the Crow Creek Sioux Tribe.

A position at the well‐known St. Joseph Indian School SD opened up. Harming, who had family members who worked at the secondary school, was hired.

As director of the high school residential program, it was her first job in administration. “I had the chance to make policy and organizational changes,” she says. “I liked that.”

Getting the students ready for life, whether that was being a parent, getting a job or going to college, challenged her. Her husband also changed jobs, moving from teaching and coaching to become a technical director for a school district.

Wanting to get her master's in counseling, Harming attempted to go back to school “many times.” Despite multiple false starts, she finally completed her degree in May 2018.

She thought she would return to secondary education following graduation, but SDSU President Dr. Barry Dunn had other plans for her. “Opportunities were presented and I took advantage,” says Harming. “I always followed my heart on different things.”

Dunn saw the need for a campuswide initiative that would focus on the Native students. The state of South Dakota has more Native reservations than any other state, yet few Natives go on to college, and fewer still graduate.

As a land‐grant school, SDSU is charged with making education accessible to all state residents. The land gifted to the university came from what was originally the Great Sioux Nation.

The Wokini (which is Lakota for “a new beginning”) Initiative looks to combine school, community and higher education. It will “offer programming and support to enrolled members of the nine tribal nations in South Dakota interested in gaining access to educational and advancement opportunities at SDSU.”

The initiative is “intended to be one point of contact and something that won't go away when the grant goes away,” says Harming. Rental fees are a “secure, continuous funding mechanism,” she says.

Money SDSU earns from renting out the land for ranching, which was going to the university library, will become the base funding for Wokini; additional funds will be needed. “He [Dunn] really saw Wokini as our responsibility as a land‐grant institution,” she says.

Harming will have dual reporting responsibility, reporting to both the provost and VP of student affairs. “I always wanted to work with the Native community,” she says. “It seemed like a perfect fit.”

Work‐life balance is a foreign term for Harming, who finished her degree while working full time. After SDSU received approval from the South Dakota Board of Regents for the Wokini Initiative, she was named director following graduation.

“I'm used to juggling many balls in the air,” she says. “I don't have a balance yet.”

Harming's oldest daughter graduated from SDSU alongside her mother. The couple has a son in college and two other children in high school.

“My kids are more self‐sufficient now,” she says, explaining how she makes it work. “And my husband picks up the slack.”