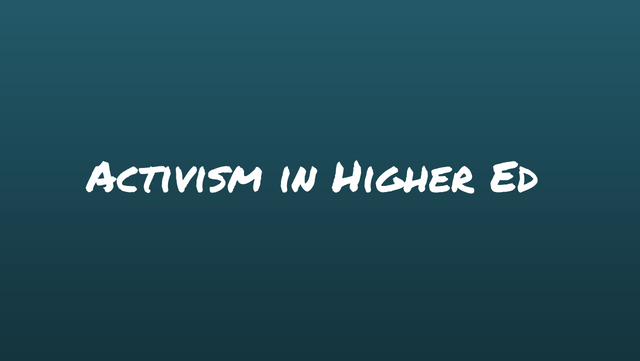 On June 25, 2018, Andrea Pino, a first‐generation, queer, Cuban‐American college student who graduated from the University of North Carolina at Chapel Hill, received notice that her six‐year‐old Title IX complaint against UNC had been resolved.

The university was, and is, in violation of Title IX.

When Pino was still an undergraduate, at just 20 years old, she filed a Title IX complaint (along with some fellow students), alleging that UNC failed to protect their rights as students under Title IX. They requested an investigation by the Office for Civil Rights (OCR) of the Department of Education. The grounds? When sexual assault victims like Pino came forward, UNC was ignoring them, or worse.

In the intervening years, Pino, along with Annie Clark, another complainant, founded End Rape on Campus (EROC). They've both moved on to new work (while EROC is still helping campus assault victims). They were featured in a major documentary and helped draft major new legislation to protect campus rape victims while their own complaint remained in limbo.

Until now. I spoke with Pino on this momentous occasion.

You've done so much in the years since you first filed your complaint. How does it feel to have come full circle after all of these years?

Coming full circle is interesting because when I first came forward I wasn't affiliated with an organization. It was just me and Annie, no EROC. And now it's just me and Annie again (no EROC). Sexual violence is still an epidemic. In many ways, nothing has changed.

We were doing this for the Class of 2020—I came forward not for myself but for the generation of Tar Heels that would follow. I came to UNC as a first‐generation college student. I came because of what was promised in the brochures. I knew I wouldn't get justice for my own experience. I wanted justice for those in the future.

You say you wanted justice for those in the future—do you feel like you have accomplished that?

The OCR findings are encouraging because they show what we said in our complaint was true—we knew it then, but now an impartial entity affirmed what we said. This outcome was a dream for us: for the university to be found responsible. We never thought this outcome would happen. When you're a 20‐something and you're ostracized by your community and vilified by your administration, this outcome is everything we could have imagined.

When you file a Title IX complaint, you don't expect punitive action—no school will actually lose its federal funding, and besides, that would be bad for the students. What you want is a finding of violation and a resolution that the school will do better.

But the outcome is also discouraging because, despite six years, things are still pretty terrible at UNC. They're still not in compliance. Plus, we now have a person in our nation's highest office who unapologetically talked about assaulting women. That's also discouraging.

But what's really great about these findings, for there to be a public affirmation—it goes beyond our own complaint, and beyond this administration. It creates a historical record.

While your complaint was still in limbo, you were a significant part of The Hunting Ground (THG), a documentary film about campus rape. What many people don't know, though, is how hard day‐to‐day life was for you then, despite all of the publicity. Talk about what it was like—working as an activist, an author, a documentary star (that's what you were), but also being poor.

I don't know why people think that victims make money. I really want to live in that world. You don't get a paycheck for doing what's right, for being an activist.

A lot of this is connected to what is expected of women and women of color—to do activist work for free. With THG, there wasn't just the filming: there was research, connecting of the producers to survivors and making sure that the film was sensitive and accurate.

Plus, there's our other activist work—working on legislation with senators and congresspersons over the years and founding EROC. There were times when Annie and I couldn't make the rent. We had to make choices: we worried about dressing the part when we couldn't afford to eat.

In many ways, this money problem is about access: people having access to lifesaving policies. People who are most impacted working on legislation or a film. But usually, these are the people who have to do so much work just surviving.

Beyond the financial risks of the work I was doing, I was also afraid of being my whole self. Was there a space for a queer daughter of Cuban refugees in the survivor movement? Would my sexuality make me less credible as an activist? I sure felt the pressure to be straight, and to tone down my accent and my mannerisms to be more digestible. It was exhausting and debilitating, and I'm only just now allowing myself to work through the pain of my own self‐erasure.

The OCR findings document takes UNC to task for a lot of wrongdoing. What sticks out the most to you? Why?

All the way at the end of the findings letter, the OCR takes UNC to task for failing to follow its own policies. In our original complaint, we said UNC had a lot of pretty language. But we knew from anecdotal evidence that UNC wasn't following its own policies. People in the Title IX office didn't know who to report to; people weren't trained.

This is a universal problem: Universities do a lot to look good on paper. They do a lot to appear to be in compliance, but they don't create a culture of commitment. What it comes down to is access to education. If survivors have to run around campus to get help, if survivors have to change their schedules or are followed around by their perpetrators or have to drop out of their Ph.D. programs—then they don't have access to education. If your students are dropping out, if they're not succeeding, then your institution is failing.

There is a need for information on retention. How many students are literally not able to be students because of sexual assault and harassment? No university wants to do that work. The data is going to be very alarming.

You and the others who filed this complaint have been criticized for bashing your alma mater. I'm also a UNC graduate, and it's clear to me that a complaint like this has as its core mission a desire to make UNC a better place for its students. There's no financial gain for the complainants, and the only “damage” to UNC is that it must improve its policies to better care for its student body. And yet—there are those who would rather this complaint, and those like it on other campuses, never be filed at all. What would you say to those people?

Nobody likes to tell the story of one of the worst nights of their life to the entire world. The exposure is not good exposure. For us who came to UNC, sexual violence was never part of the plan. We just wanted to come to campus, enjoy college and graduate.

All I wanted was the Tar Heel experience that I was promised. I wanted to be proud of my university. I was, and I am, in many ways, proud, mostly because of the incredible people that I've met. It's time for the university to reflect our values—and to be safe for all students.