The Gender Politics of White Supremacy 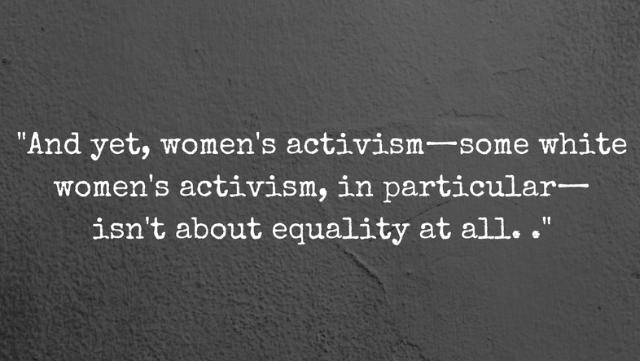 There was much media attention given to the Women's March on Washington in 2017 and the local marches across the nation and the globe. Over a year and few months ago, over 3 million people marched for women's rights, which makes it (likely) the largest single‐day protest in history. This past January, there were commemorative marches nationwide to celebrate the first march and expand the focus to include immigration, LGBTQ and trans* rights, and abortion. As I've written previously in WIHE, my family participated in our local Women's March in 2017, and we were so excited to march as a form of protest and an affirmation of women's rights.

But lately, I find myself thinking about a particular image from the 2017 march in DC. It's a photograph of a black woman holding a poster emblazoned with “Don't Forget: White Women Voted for Trump.” Standing behind her are three blonde‐haired, white women, wearing pink hats and taking a selfie. The photo went viral last year because it pointed to an unsettling truth about the presidential election: 53% of white women who voted in the election cast their votes for Donald Trump.

After the election, think pieces abounded about why a slight majority of white women voted for a candidate accused of sexual harassment and caught on tape saying remarkably terrible things about women. The question that most of these articles struggled with was this one: Why didn't white women vote for a white woman? Since many folks assumed that all women would vote for a woman because of gender, the election results proved surprising. The harder question for journalists and analysts to answer was: Why didn't white women vote for a candidate who seemed to represent a move toward gender equality and progress?

I thought of the shock and confusion about white women's voting patterns again recently, after I picked up Dr. Elizabeth Gillespie McRae's Mothers of Massive Resistance: White Women and the Politics of White Supremacy (2018). This book is a much‐needed history of white women's support, advocacy, activism and maintenance of segregation from the 1920s through the 1970s. McRae, an associate professor of history at Western Carolina University NC, writes about four white women—Nell Battle Lewis, Florence Sillers Ogden, Mary Dawson Cain and Cornelia Dabney Tucker—and their lifelong campaigns to bolster segregation and Jim Crow.

Many previous histories of segregation tend to focus on the national level (federal legislation, Supreme Court decisions and presidential interventions) and the white men who supported racial segregation, but there's little attention paid to white women's roles. Focusing on national efforts makes it seem like segregation suddenly ended with Brown v. Board of Education (1954). McRae, however, shows the support and defense of segregation in local communities—which were able to maneuver around Brown—continued to uphold white supremacy despite federal intervention.

Most important, Mothers of Massive Resistance documents how white women were essential to white supremacist politics. White women promoted, defended and maintained segregation in their local communities, and they staunchly opposed racial equality. McRae writes, “White segregationist women capitalized on their roles in social welfare institutions, public education, partisan politics, and popular culture to shape the Jim Crow order.” These female segregationists were from across the political spectrum and the nation, not just the South. They were college‐educated and not, young and old, married and single, mothers and not mothers, and rural, urban and suburban. What united them was their support of white supremacy and their desire to continue a racial hierarchy that firmly placed white over black.

And hauntingly, McRae demonstrates how white women worked to guarantee that public education trained all children in white supremacist politics. These women censored textbooks, sponsored essay contests that emphasized Jim Crow, de‐emphasized the role of slavery in the Civil War in their columns and newspaper articles, worked in a variety of organizations that actively opposed integration and voted to support white supremacy. There was only one American story for them, white excellence and innocence, removed from the violent history of colonization, slavery and structural racism.

As I read Mothers of Massive Resistance and noted all of the colleges and universities that supported segregation and white supremacist politics, I realized that this is a necessary book for right now. McRae's attention to the history of segregation on institutions of higher ed is crucial, and the legacy of segregation deserves much more attention than it currently garners. Higher ed needs to grapple more with how institutions were built by the labor of enslaved peoples and then supported segregation as the unquestioned status quo.

But more than that, perhaps, we need to consider the lesson McRae offers about white women's historical support of white supremacy. While the Women's March garnered press attention because of its progressive focus and unrepentant call for women's rights, there's an assumption, still, that women's activism is somehow inherently progressive. And yet, women's activism—some white women's activism, in particular—isn't about equality at all. Their activism, instead, is in support of current systems of inequality, and often white supremacy. McRae's book is one we need to read and take seriously because she shows how and why white women supported white supremacy and helped create modern colorblind political rhetoric that still supports white supremacist politics. White women's campaigns for segregation continue to influence our communities, national and local, as well as what stories get told about America and who is considered American. We've yet to reckon with white women's conservative activism, past and present, and we need to now.