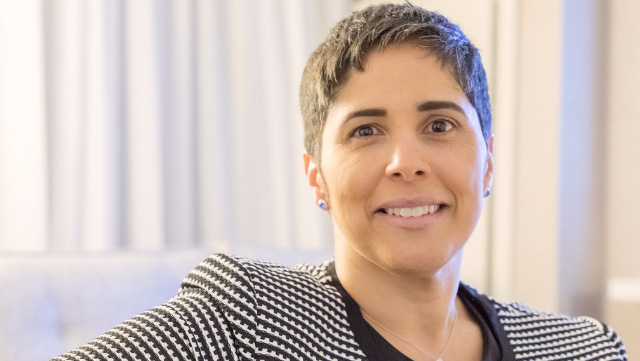 When Dr. Shirley M. Collado became president of Ithaca College NY on July 1, she brought her experience in student and faculty development, vision for strategic planning and a commitment to shared governance. She also brought a connection to the BOLD Women's Leadership Network, which she founded in 2016 while she was executive vice chancellor and chief operating officer at Rutgers University–Newark NJ.

Chosen through a comprehensive selection process, BOLD scholars are undergraduate female and female-identifying students that engage in weekly workshops led by faculty mentors focused on leadership skills, cultural competence and collaborative work. They also interact with BOLD scholars at other colleges and universities. All the scholars will participate collaboratively in campus transformation projects that they envision, plan and execute.

Collado's life was forever impacted when she was selected for the inaugural class of scholars of the Posse Foundation, which was founded to identify, select and nurture students from diverse and underserved populations. The daughter of immigrants from the Dominican Republic and the first in her family to attend college, Collado saw everything change when she boarded a Greyhound bus to Vanderbilt University.

She had no plans to pursue a college presidency. Collado felt her pathway was focused on student success, broadening access to higher education and creating open and affirming conditions that enable all members of an academic community to thrive. But others saw her potential.

“I had not been on a career track to be a college president, but I also was not on a plan to go away to college, to get a PhD, to become a trustee of Vanderbilt. All of these have been the result of people seeing something and investing in me and me cultivating environments I really believe in,” Collado says.

When Collado decided a presidency was something she was called to do, she wanted to find an institution aligned with her core values. She felt a clear connection to Ithaca College, and the board of trustees saw she was the right leader. Her goal is to cultivate an academic community where all students can thrive.

As a Posse scholar, Collado was propelled by the powerful idea that if you go to college in the company of people who believe in you, see your academic promise and leadership potential, mentor you and help you navigate the higher education experience, you not only have a good chance to succeed, but also to make an impact. Those ideas led her to develop the HLLC.

“When you have a group, you're developing social capital along with your intellectual capital—especially if you're going places that weren't historically created for people like you,” says Collado, who has experienced being a pioneer and the only Hispanic person in certain academic environments.

The BOLD initiative is funded by The Pussycat Foundation, a private foundation established to honor the late Helen Gurley Brown, editor of Cosmopolitan magazine. Collado admires Brown's authenticity and ability to negotiate spaces not made for women. The foundation took note of Collado's work with HLLC, the Creating Connections Consortium (C3) and the Posse Foundation, and requested a proposal from her with regard to developing women leaders.

“I wanted to dream big,” she says of the idea to develop a cross-institutional, multigenerational network of women.

“I've mentored so many young women in higher ed, and many of those young women show up as themselves, have courage and want to be change agents, but … need to be developed,” says Collado. “The pillars of BOLD are authenticity, courage and vision.”

The goal is to cultivate skill sets that will enable these women to make an impact on their institutions and the world at large. The curriculum involves developing individual leadership strengths, group dynamics and dialogue facilitation. There are additional opportunities after graduation, including a fellowship.

Ten women at each school form that school's cohort. Each cohort submits a proposal to activate a campus transformation project—something that will improve campus life, promote a more inclusive campus community for all students (male, female and gender-neutral) and be sustainable. A central element to success is the communication and collaboration such projects require.

An example of a possible project is expanding counseling services for students in crisis. The crises can be anything from natural disasters, such as hurricanes, to financial hardship to immigration to family. Another project could include creating a virtual hub for commuter students to facilitate interaction and greater sense of community on campus.

“We need all kinds of women in conversation with each other activating change inside and outside the academy,” says Collado. “Through the use of technology, through an annual retreat and through a summit, they will share what they're doing with cohorts across the other schools.

“I believe in cross-institutional collaboration,” she adds. “We have to be very intentional about cultivating relationships.”

An intergenerational network of women leaders across all sectors of career paths is being assembled. The first BOLD leadership women's summit was held on Oct. 6 in New Jersey. All of the BOLD scholars attended, along with the presidents of their institutions and invited guests who embody the BOLD vision.

“I'm hoping BOLD will become a national force and that we'll grow it over time,” says Collado. “These are women who want to lean into difficult discourse. They need help cultivating their skills because we're living in such a complicated society right now.”