Tomisha Brock Strikes Up the Band 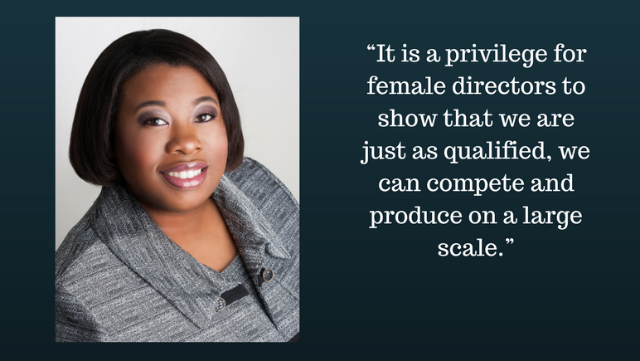 When you're down so far, the only place to go is up. Tomisha Brock knows the situation well. Brock joined Clark Atlanta University GA early this year as the first female director of university bands. The 35-year-old native Virginian inherited a program that was definitely at rock bottom.

She started with six members and, over the summer, with an aggressive recruiting program that targeted both former band members and new students, grew that to 64 members. She hopes to increase the number of participants to between 96 and 128 next year and eventually grow the program to a massive 196 musicians, a pretty significant reach in a school with only 3,600 students.

Brock grew up in a family where music and architecture “were kind of the family business,” she says. Starting school at three years old, she graduated from high school when she was just 16.

At age six, Brock started singing in her church choir, and she got a clarinet when she was 10. “It was the cheapest instrument” to play, she explains. A cousin Brock looked up to also played it.

Her research interest focuses on why African-American music teacher candidates have difficulty passing teacher certification tests. If they're unable to pass and earn their degree, they can't inspire the next generation of students.

Despite research showing its many benefits, music is no longer part of the school day in many communities. The pipelines from middle school to high school to college that were once filled with potential recruits for music education majors and marching bands have been replaced by sports, jobs and technology.

Brock disagrees with that trend. “Students who are involved in music and the marching band develop solid social skills,” she says. “It provides them an avenue to express themselves, free from judgment.”

Participating in music also “teaches and enhances the concepts of self-discipline, accountability and teamwork,” she says.

In addition to being director of bands, Brock is also an assistant professor of music at CAU. During her tenure, she intends to restart the music education program and grow it into the “premier program in the Georgia region.” Her long-term goal is to “really help to maximize student musicianship at the collegiate level.”

Her students will “understand the importance of music in their lives and the contributions music education has in creating the ‘total person,’” says Brock. “When students leave my program, they will possess valuable skills that will help market them in their careers wherever they go.”

A Series of Firsts

Brock is the first woman to serve as band director at the Georgia school, as well as the first female director in the Southern Intercollegiate Athletic Conference, which includes schools such as Morehouse College GA and Tuskegee University AL.

She's also one of only five female band directors serving as head director or assistant/associate director at all historically black colleges and universities (HBCUs) across the nation. Brock notes that she was “truly honored and excited to make history at CAU.”

For Brock, work-life balance is currently on hiatus. She's the mother of a preteen girl and is in a relationship. Her daughter, who seems to be following in her mother's musical footsteps, plays clarinet, although “she currently has an interest in percussion and trumpet,” says Brock.

Travel is a passion, as is watching movies. But those and other activities are on hold for Brock, as she noted that she expects to receive her doctorate in May 2018. “I have very little free time,” she says.

Although she was one of three finalists for the CAU job, Brock had to fight for legitimacy as a woman educator. One of the challenges she's working with besides building a band from the ground up is “the validity of my qualifications to do the job,” she says.

“I have to prove I'm just as qualified as a male in my position,” she says, despite having 15 years of teaching experience (including eight in higher education). “I have the same skills as they do.”

Fortunately, Brock has received a lot of school and community support. The alumni, the community and the administration are on “standby for supporting the band,” which will eventually need new uniforms and additional instruments.

“The campus is a family-friendly environment,” she says. “The institution is a great fit for me.”

She scored a big win when the band was part of this year's Honda Battle of the Bands, a competition that celebrates, supports and recognizes “the excellence of Black college marching bands and the unique academic experience offered by Historically Black Colleges and Universities.”

CAU was one of 39 bands to participate in the battle, which also featured a college fair to encourage prospective high school students to consider enrolling in an HBCU. Honda awards a $20,000 honorarium to the participating bands, and eight will move on to an invitational showcase. This year, the showcase is scheduled for Jan. 27, 2018, in Atlanta's Mercedes-Benz Stadium.

Although CAU did not become one of the eight finalists, the fact that Brock started with six students earlier this year and managed to build a program that was able to compete speaks volumes about her tenacity and focus. “It is a privilege for female directors to show that we are just as qualified, we can compete and produce on a large scale,” she says.