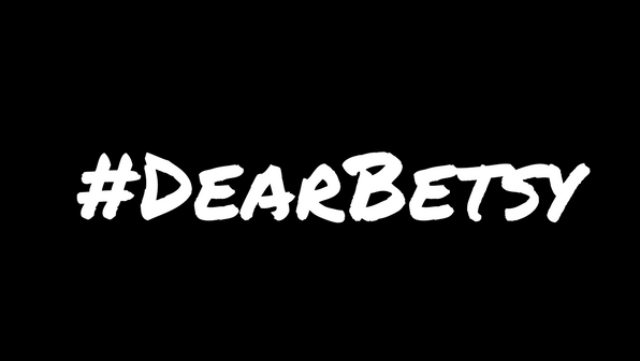 I've been worried about your approach to higher education since at least your confirmation hearings to become secretary of education in January. To be honest, I called my senators to oppose your confirmation, and then I watched as you were only confirmed because Vice President Mike Pence cast the decisive vote (51–50). You might already know this, but it was the first time in Senate history that a vice president broke a tie for a confirmation.

DOE Under the Current Administration

As I have compiled Newswatch (WIHE's monthly roundup of important news) each month since January, there have been at least one, if not more, stories about your influence on higher education. A colleague suggested that I create a subheading in Newswatch called DeVos Watch, but I have so far refused to do so.

The news surrounding the Department of Education (DOE) under your guidance never appears to be good. Rollbacks on protections for trans* students. Inaction on student loan forgiveness. And now, you've taken aim at Title IX and the Obama administration's policy on campus sexual assault. This didn't surprise me because I've been paying attention. It was pretty clear that you were going to do something sooner rather than later, especially after you met with men's rights activists to discuss what happens to the students who are accused of sexual assault on campus.

In January, several groups launched the #DearBetsy campaign to make their case for defending Title IX. They relaunched this campaign in July when it was apparent you were going to take on Title IX. Did you read their stories? I did. I know how important the Obama-era guidance on Title IX was to them. I'm on their side, if you couldn't tell already. They're the reason I'm writing you today.

I couldn't help but think of these activists on Sept. 22 when the acting Assistant Secretary for Civil Rights Candice Jackson published a letter that withdrew the Dear Colleague Letter (2011) and Questions and Answers on Title IX and Sexual Violence (2014). Jackson writes, “The 2011 and 2014 guidance documents may have been well-intentioned, but those documents have led to the deprivation of rights for many students—both accused students denied their fair process and victims denied an adequate resolution for complaints.”

A deprivation of rights for the accused and victims, she claims, but I'm not sure she actually cares about both groups of students. Are you?

Jackson, one of your employees at the DOE, appears to be unsupportive of survivors of sexual assault. After all, she explained to The New York Times in August that “90%” of sexual assault claims are in “the category of ‘we were both drunk,’ ‘we broke up, and six months later I found myself under a Title IX investigation because she just decided that our last sleeping together was not quite right.’”

Her comments filled me with rage and painful sorrow. One of your employees presented her own opinion rather than the statistics we have about campus sexual assault. Furthermore, she perpetuated the nefarious yet stubbornly common idea that women can't be believed when they tell us they've been assaulted. Believing women is crucial, Betsy, so Jackson's comments are harmful.

Later, Jackson attempted to walk back from her comments, but I can't read the new letter without thinking of her earlier comments. I can't take her seriously when she claims that there's been “remarkable progress” at schools toward eradicating sex discrimination. (Sure, there's been progress, but we are nowhere near eradicating gender discrimination at our schools.) I can't read her letter without a fear that schools will move backward on how to manage and adjudicate sexual assault on campus. I can't read her letter without thinking about you.

After the rollback of guidance on Title IX, The New York Times reported that you wanted to give “colleges more freedom to balance the rights of accused students with the need to crack down on serious misconduct.” On its face, this might sound reasonable. It is not.

And this rollback is, unsurprisingly, supported by “advocates for accused students,” who are most often men, and claim that “campus judicial processes … favor female accusers.” They are upset that investigations favor women and not men. And Jackson's letter, then, attempts to turn the tide to favor men. This will not make our campuses safe for women. This will not help survivors on campus.