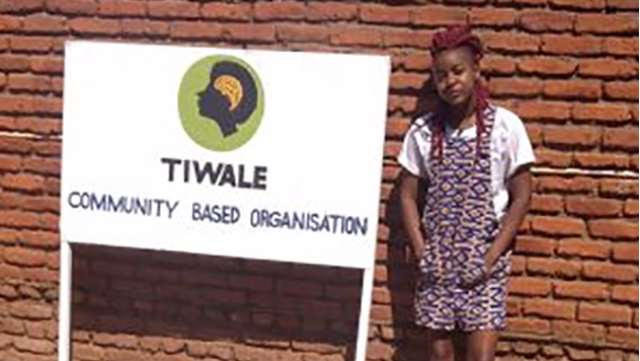 When she was 18, Chilemba founded a community-based organization, Tiwale, in her native Malawi that is empowering women by providing education, vocational training and microloans.

Tiwale—a word in Chichewa (the language spoken by 57% of Malawians) that translates as “let’s glow”—was born after Chilemba met a young woman who, at age 17, was married with three children and living in extreme poverty.

Wanting to provide for her children, the woman had tried to get a small loan in order to start her own homebased business. The banks refused to fund her dreams, and the rates charged by local moneylenders were exorbitant.

Chilemba felt she had to do something to help not only this woman but others like her. As a result, she created Tiwale to provide microloans to women with entrepreneurial dreams. As Chilemba explains, the organization aims “to be the light to guide women toward realizing their purpose and goals.”

Malawi is a landlocked country in southeast Africa that’s about the size of Pennsylvania. It ranks among the 10 poorest nations in the world. Though the economy is steadily improving, The Hunger Project reports that 53% of the population of more than 16 million people still live below the poverty line.

And, while the 1995 Malawi Constitution guarantees equal rights to men and women, immense obstacles to equality permeate the society, according to the Women and Law in Southern Africa Research and Educational Trust.

Poverty itself is a gendered phenomenon in Malawi in that female-headed households account for a majority of the poor. Violence against women is also a significant problem that occurs in the home, community and workplace.

By her own account, Chilemba was not a natural-born leader. Her entrepreneurial drive was evident from the time she was 12, when she started selling baked goods at church, but she was shy. “Growing up in Malawi, I was always interested in getting involved in community development work,” she says.

She made the leap from “getting involved” to taking the lead after receiving formal training at the African Leadership Academy in Johannesburg, South Africa, which opened her eyes to the potential of social entrepreneurship and gave her the skills to start Tiwale.

After finishing the two-year program, she was determined to return home to Malawi and make a difference. “I was very passionate about education access among young women,” she says. “I took time off—that’s when I was 18—and started Tiwale.”

That was four years ago. Now, what began as a summer project has evolved into an organization that has garnered international attention.

During her first year at Mount Holyoke, Chilemba felt she had to choose between Tiwale and her education. As she prepares to begin her senior year, however, she believes that much has changed—for her and for the school. “I watched Mount Holyoke grow, creating more of a space where entrepreneurs can continue their work and grow it while also on a school platform,” she says.

Last semester, she took a class in social entrepreneurship. “In that class I had the opportunity to work on Tiwale as part of my studies,” she says. “I think at Mount Holyoke we’re in a very unique space.”

In addition to classroom studies, the women’s college in Massachusetts offers Entrepreneurship Programming, a campus initiative aimed at supporting and encouraging entrepreneurial efforts on campus. It provides students and interested participants with the opportunity to mingle and develop collaboratively with other students, mentors and professors while working toward engaging hands and minds in entrepreneurship.

In 2015, Forbes named Chilemba to its list of 30 under 30 African entrepreneurs. She has received the Commonwealth Youth Award for Excellence in Development Work, the Harold Grinspoon Foundation Entrepreneurial Award, and the Mastercard and Ashoka Future Forward: Youth Innovations for Employment in Africa Award, among others.

Last year, she attended the Clinton Global Initiative University conference, where 1,000 students from 80 countries discussed and developed innovative solutions to pressing world problems. “As we began the second week of Women’s History Month,” Chelsea Clinton wrote in a blog post following the event, “I was especially excited CGI U could provide a platform for students to make commitments that challenge social norms and practices that too often constrain and even deny the potential of women and girls.”

Clinton said she was also grateful for the opportunity to highlight the commitments made by the many “brilliant, inspired young women in attendance—young women who are already emerging as leaders on their campuses and will clearly do great and important work in global development, engineering, public health and more.” She praised Chilemba—one of only two students whose efforts were highlighted in the blog posting—for her efforts as a rising social entrepreneur in Malawi.

By the time Chilemba attended the conference, Tiwale had grown beyond her initial vision to become a dynamic social enterprise that helped women start small businesses, taught entrepreneurial skills and provided grants for education.

“Ellen came to CGI U with a commitment to help local women increase their income and provide employment opportunities through the production of traditional fabrics,” Clinton said, explaining that “many young Malawian girls—some as young as 12 years old—are married off in exchange for dowries, preventing them from finishing school or growing up to chart their own paths.”

Chilemba’s project was chosen for a CGI-run crowdfunding campaign. Now, fabrics that are designed and dye-printed by 40 women trained by Tiwale are sold and shipped worldwide from Chilemba’s dorm room. “Forty may not sound like a lot,” Clinton commented, “but it’s a lot to those women and the other young women they, in turn, will inspire by their examples.”

The idea to broaden Tiwale’s scope was driven by need. The microfinance program around which the organization was founded relied on philanthropy. “We didn’t charge any interest for our loans and also had operating expenses, so we were operating at a loss and were very donor-dependent to fill in that gap,” Chilemba says. “Our goal has been to become fully self-sustained.”

She and the other women who have come together to fuel Tiwale’s growth—many of whom first came to the organization for training—are well on their way. For the last fiscal year (May 2015– May 2016), Chilemba reports that 80% of the organization’s income was generated by its online store.

Eventually, Chilemba hopes to build a women’s center in Malawi. “We want that to be a space for women to have opportunities to further their education,” she says. “We just want to create this space where there will be continual growth for women.”

Chilemba’s plans call for her to graduate from Mount Holyoke in May 2017 and, at some point, to also move on from Tiwale. “My goal as a social entrepreneur is to take Tiwale to a place where it is independent of me,” she says.

“I really want to create a space where people feel comfortable enough to contribute their ideas. We’re supposed to be a community-based organization and, in that sense, we’re trying to create that space where it feels like everyone owns it. It’s making everybody feel like their ideas will be supported and that we can do this together.”

From there, she wants to continue to devote her energies to development work in Africa. “I want to help other different kinds of communities, support systems and set up new initiatives, new operations and help contribute to the conversation of what development work should look like,” she says.

As for the young mother whose plight inspired Chilemba to launch Tiwale? “She has had  quite a journey with us,” Chilemba says. After repaying the organization for the two microloans she received, she became part of the leadership team. “She was our community secretary,” Chilemba says. “Now, she is one of the leaders of our fabric tie-dye project.”