Affirmative Action and the Fight for the Status Quo 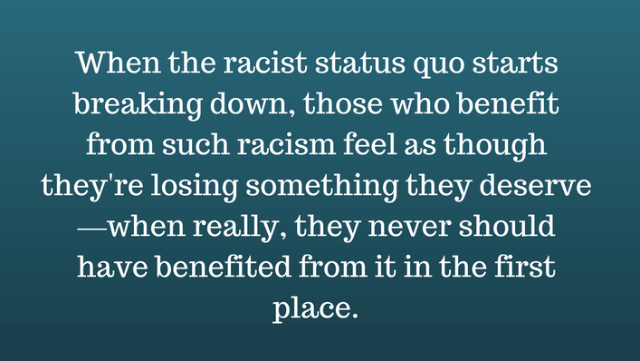 In August of this year, the debate over affirmative action in higher education returned, once again, to the fore. The New York Times published an article based on an internal Justice Department memo it obtained; the memo described a plan wherein the Civil Rights Division would start “investigating and suing universities” over policies that “discriminate against white applicants,” presumably by admitting applicants of color.

The claim that affirmative action discriminates against white applicants is an old, tired argument at this point, and one that has been litigated to the point of obsolescence. Therefore, to clarify my position, I'm going to state for the record the following: affirmative action is not reverse racism. I could stop this now, but instead, I want to talk about the movies.

In the latter part of August, the cast for the reboot of the comic-book movie Hellboy was announced, including the part of the character Major Ben Daimio. Cast to play Daimio was Ed Skrein, who'd starred as the villain Ajax in the movie Deadpool and appeared in other films. There was backlash against his casting as Daimio because in the comics, the character is Japanese-American. Casting a white actor to play a role that is for a person of color is called “whitewashing.” Whitewashing is the erasure of culture—Daimio's Japanese heritage is significant to the story and to the people who might want to see themselves reflected on screen. There is the problem of numbers—there are so few roles for actors of color to begin with that when you cast the few roles that do exist with white actors, the opportunities for actors of color in Hollywood grow even more minuscule.

As Vox reported, whitewashing Asian characters with white actors has happened recently in Doctor Strange, when the white Tilda Swinton was cast to play what had been an Asian character in the book; it also happened with Scarlett Johansson in Ghost in the Shell, Jake Gyllenhaal in Prince of Persia and Emma Stone in Aloha. This happens a lot.

What is remarkable about the Skrein-Hellboy situation is this: Ed Skrein backed out of the Daimio role. He provided a statement that supported inclusivity and representation. As far as anyone can tell, this is the first time a white actor has turned down a role and declared that a person of color should be cast instead.

But the backlash to arguments of whitewashing is so predictable: “Why is nobody complaining when black actors take over known white characters? Where was the outrage when Will Smith was announced to play Deadshot? Why is nobody complaining about whoever that black woman is is [sic] playing Domino in Deadpool 2?” You only have to surf social media for a few minutes to find the complaints of reverse racism that erupt whenever the whitewashing debate arises.

But the fact remains that there is an immense number of roles for white actors when compared to those for actors of color. If you take one of those roles and cast an actor of color (Will Smith as Deadshot in Suicide Squad, for example), the number of roles for white actors doesn't become noticeably smaller. But there are so few roles for actors of color that if you take just one of them away, proportionally that role's disappearance makes a very large difference.

So what do whitewashing and Hellboy and Hollywood have to do with affirmative action? On one level, you could say, nothing at all. When you go to the movies, who you see on the screen has nothing at all to do with what you learn in the classroom and who your classmates are and who your doctor or lawyer or accountant is.

But affirmative action and whitewashing and every other battleground for racial equality must fight a similar battle. When Ed Skrein backed out of Hellboy, people got angry and cried reverse racism. When students are admitted to college and race is a factor that is taken into account, people get really, really angry.

I can't believe we still have to talk about this. But we do.

Reverse whitewashing, that is, casting an actor of color in a traditionally white role in a way that has negative racial consequences (see the Deadshot example) can't be a thing when, in comparison, movie roles for white characters are as plentiful as water at Niagara Falls. Why can't reverse whitewashing (a subset of reverse racism) exist? Because when one small change makes no difference to the lives of white actors or white moviegoers, it causes no harm. It has no material effect on the lives of people. If it can't hurt you, it isn't real.

But, on the other hand, having one more actor of color on the screen makes a huge difference in the lives of moviegoers—whites and people of color. To have more actors of color on the screen, proportionally, changes things a lot when most roles are predominantly written by white people about white people for white people. One role starring a person of color makes an enormous difference in showing us what our world looks like and the possibilities of who we can be as a society.

But affirmative action can't be reverse racism (if such a thing existed), not anymore, not with how the U.S. Supreme Court has limited the use of race in college admissions during the past decades of litigation. Think of the criticisms you hear of affirmative action. “Affirmative action is quotas!” Well, no. Institutions can't use racial quotas of any kind, not since Regents of the University of California v. Bakke in 1978. “Affirmative action is race-based admissions!” Again, no. Race can only be used as one of many factors, and not as the deciding factor, and only for the purpose of creating educational benefits that flow from a diverse student body, according to Grutter v. Bollinger in 2003. In other words, the purpose of affirmative action can't even be to remedy past or present racism. Its only purpose can be to create the educational benefits of a diverse student body.

And never forget, these affirmative action fights are over seats in only the highest of higher education institutions—one could say, over the college equivalent of a Hollywood casting call. For most students, getting into Harvard, Yale and Stanford is the same as landing an acting gig in a Hollywood movie. Both are pipe dreams. In other words, the affirmative action fight is over something that perhaps shouldn't exist at all: it is over seats in institutions that support the U.S. class hierarchy as strongly as family wealth or connections or race itself.

No one sues the University of Texas at El Paso for admission. They sue the flagship in Austin, the Texas equivalent of Harvard. They sue Berkeley and Michigan and every “highly selective” institution out there because the ugly secret is that attending college isn't always good enough to even make it out of poverty anymore. You have to attend certain colleges.

That simply attending college provides the same opportunity for all is a terrible myth. Elite educational institutions maintain our socially stratified status quo—after all, 35% of Harvard's latest class are legacy admits (according to Harvard's own newspaper). Attending an elite institution gives an attendee the chance to leapfrog into Mount Olympus. Those fighting over the precious few seats know it. (I am firmly against the stratification of our higher education system, but that discussion is for another article.)

That's what reverse racism is really about, and always has been about: When the racist status quo starts breaking down, those who benefit from such racism feel as though they're losing something they deserve—when really, they never should have benefited from it in the first place.

Reverse racism is the destruction of institutional racism, and I welcome it.