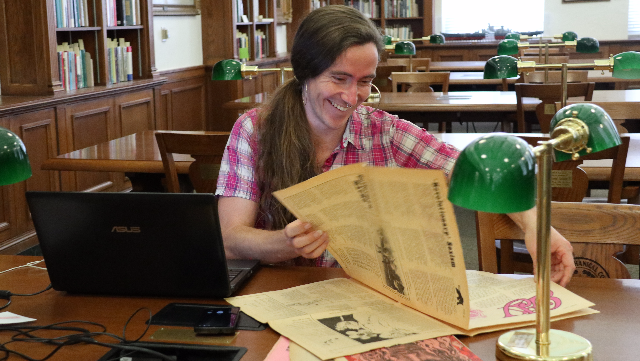 The Don Kelly Research Collection of Gay Literature and Culture housed in Cushing Memorial Library and Archives at Texas A&M University launched a fellowship that increases access to this unique resource of information and insight into LGBTQ history, culture, literature and pop culture depictions.

Resource for Study
Nikita Shepard, a graduate student at Middle Tennessee State University, is working on a master's degree thesis on the history of LGBTQ youth with a focus on the time period of post–World War II to 2000. They are particularly interested in pre-Stonewall (1969) social history but found it challenging to research, as many LGBTQ youth of that period had zero visibility.

Shepard's research took a positive turn this summer when they received the first Don Kelly Research Collection Fellowship, which enabled them to come to Texas A&M and do research. They say access to the collection has provided an exceptionally broad window into 20th-century LGBTQ American culture, most particularly literature and journalism. It is a phenomenal opportunity for a graduate student to write a deeply meaningful thesis as well as articles that will likely get published as they touch on topics not largely covered.

“For my master's thesis on LGBTQ youth culture and organizing, it has given me both a very helpful bird's-eye view of how LGBTQ people have organized, communicated and represented themselves and their movements from the homophile movement era (1950s–60s) through the gay liberation era (1970s) and beyond,” says Shepard.

Kelly is a retired civil servant who has been openly gay throughout his life. A lover of books, he told OutSmart magazine that he learned from Anthony Slide's book The Lost Gay Novels about a series of 50 novels with gay themes and characters from the early 20th century and began collecting first editions. As time went on, he collected everything from cheesy pulp fiction to early gay magazines to AIDS literature to posters. The collection began with an emphasis on the G but now includes a broad representation of the L, B, T and Q.

In September 2012, Rebecca Hankins, Africana & Women's & Gender Studies Librarian/Curator at Texas A&M, learned that Kelly wanted to sell his collection after reading about it on a listserv for archivists. After finding out details of the collection and that Kelly lived in Texas, she felt it would be an incredible acquisition for the university.

She contacted faculty members on campus from diverse disciplines, such as history, film studies and English, that she thought would be interested in the collection and helping to raise money for the acquisition. Kelly made a presentation, and those in attendance saw the value in the collection, particularly the breadth and depth of the materials. The money was ultimately raised by the library, the College of Liberal Arts and other departments.

“We started with about 12,500 items. We're over 20,000 items now. Most of that is due to [Don Kelly] purchasing whatever is needed,” Hankins says. “We had a huge exhibition and a great opening.”

Texas A&M already had an LGBTQ collection, including the work of alumna Phyllis Frye, the first openly transgender judge appointed in Texas. Hankins says the addition of this massive Kelly collection should make the campus a hub for LGBTQ research, and she is disseminating information to archivists. Scholars interested in studying by era, geographic location, or race and ethnicity have a wide range of material to examine.

Hankins was approached by Dr. Pam Matthews, dean of the College of Liberal Arts, about developing a research fellowship. Applicants for the fellowship can request a period of time from three weeks to three months to work with the collection's resources. There is a stipend of $500 a week, and expenses are the responsibility of the fellow.

“It is such a strong research collection,” says Hankins. “When Don finds there is someone doing research in an area, he will buy [additional material] in that area.”

As a result of Kelly's collection, other donors have also contributed LGBTQ materials. The materials have a numbering system so items can be located. Texas A&M faculty, undergraduates and graduate students have full access, as do outside scholars. Professors even give direct assignments. The rich artistic material includes a magazine with a cover photo taken by Robert Mapplethorpe.

Hankins says there were stellar applicants for the inaugural fellowship, but Shepard stood out because they are exploring an area about which not a lot has been written, LGBTQ youth.

“This collection offers a remarkably diverse and thorough range of materials exploring the margins of 20th-century American gender and sexuality,” says Shepard, who was on campus in June and July. “From novels, poetry, art and journalism produced by sexual and gender minorities to coverage produced by a sometimes curious and sometimes hostile broader society, the collection's treasures provide insights into how representations of gendered and sexual difference have evolved over the course of the century.

“I'd recommend it to anyone interested in gender studies and queer studies, whether your angle is literary criticism, history, art, cultural studies or any related discipline, or just a queer culture enthusiast intrigued to dig into our incredibly rich shared past.”