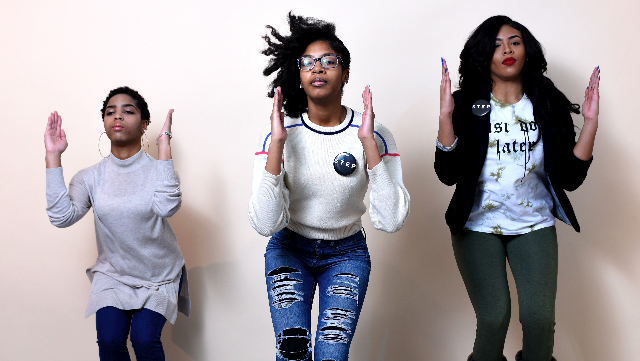 The moving documentary film Step chronicles the senior year of the inaugural class at the Baltimore Leadership School for Young Women. Set against the backdrop of heightened racial tensions in Baltimore following the death of Freddie Gray, the film shows how members of the school's step dance team deal with obstacles as they plan for the future.

Step dancing is a form of dance that uses the body like a percussion instrument to produce complex rhythms and sounds through a mixture of steps, spoken words and hand claps. It was created by African-American college students in the early-to-mid-20th century.

Step provides real-life illustrations of what goes into preparing inner-city kids to navigate the college application process. Three young women—Blessin Giraldo, Tayla Solomon and Cori Grainger—serve as the film's centerpiece. The school's director of college counseling, Paula Dofat, works to help the girls, each with different strengths and challenges, achieve their full potential.

A huge hit at this year's Sundance Film Festival, the participants, including students, families and school administration, exposed their lives to the cameras for nearly one year. When Dofat saw the film for the first time she was emotional. She believes it will get people thinking about how they can make an impact on a diverse range of young people who will be the first in their families to attend college.

“It will spark thought and conversation about what we as people across the United States can do to help with higher education,” says Dofat. In terms of K through 12, there needs to be greater equity and access to quality education, which will prepare students for higher ed.

As filming progressed, Dofat says she forgot the cameras were there. When she was in the midst of college application season, talking to admissions counselors, things got real—raw emotions and all. The most important thing to her is that people seeing the film understand that if a student is motivated, even if that involves a turnaround for someone who previously underachieved, there is a place for him or her in higher education.

“We can't give up on any students who want to continue their education,” Dofat says. She mentions transition programs at four-year institutions and community colleges as resources.

The lives of (l-r) Tayla Solomon, Cori Grainger and Blessin Giraldo fuel the narrative of Step.

“Instead of a guidance counselor, we have four or five people doing the job,” Dofat says. “I only do college counseling. I do college awareness and college readiness from sixth grade through 12th grade, which makes a huge difference. We have a school counselor, who deals with [the] social and emotional; a registrar, who deals with registering students and getting them into their proper classes; [and] a test coordinator; we also have social workers and psychologists.”

“All of those roles that would ordinarily be that of the guidance counselor, we've broken up into several people,” she adds. “We know every girl by name and by need, and we get a lot done because of that.”

Dofat says the film shines a light on how a community model and mindset are needed to get students college-ready. She works as a team with teachers—passing information on to them that helps shape their curriculum so the students are developing crucial skills. At Dofat's school, colleges and universities are also part of that team, communicating with counselors about what they want to see in terms of academics as well as soft skills.

College prep starts early, and the young women at the Baltimore Leadership School for Young Women share college-related experiences, such as spending 24 hours on the campus of Coppin State University MD.Step centers on the school's step dance team, which serves as a source of motivation, inspiration and solidarity.

“Step dancing solidifies the idea of community and the idea that it takes more than one person to get to an end goal. You need people to help and support you and not do it on your own,” says Dofat. “It also teaches them how to communicate with each other and how to get along. There are a lot of soft skills that are embedded in being a part of a step team.

“You know that other people are depending on you, so you have to be accountable,” she adds. “Showing there is power in numbers and they can be supported in what they're doing and nobody is going to get left behind.”

Through the film, Dofat shares points about college awareness, things that educators can incorporate into their work. Step also shows different ways for communities to participate in education.

“The bottom line of it for me is people knowing and understanding that GPA does not necessarily denote whether you can be successful,” says Dofat. “It has to do with drive, grit, that aha moment, the turnaround and then having support to get you through if that is your hope and desire.”