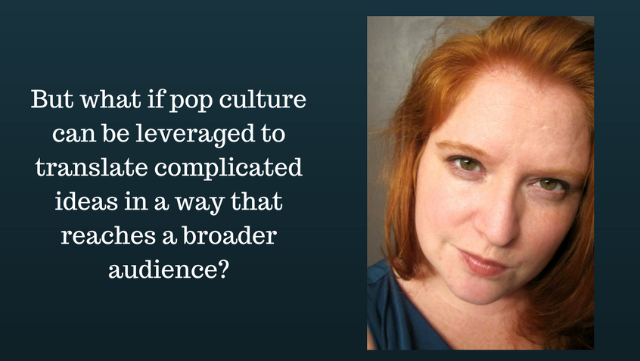 Scholars traditionally have had trouble translating their high-level, nuanced thinking to a broader audience, said Dr. Megan Goodwin. Pop culture's flip communication style and lack of sources is the equivalent of nails scratching a blackboard to many.

But what if pop culture can be leveraged to translate complicated ideas in a way that reaches a broader audience?

An article in The Chronicle of Higher Education about using BuzzFeed as a platform for assignments inspired Goodwin to have her students at Syracuse University NY utilize one of the company's digital tools for their final project in an honors class: Election! Race, Religion and American Politics. (“The course title was a nod to the belief that many Americans feel they are an ‘elect’ people,” she said.)

Goodwin, who earned her PhD in religion and culture at the University of North Carolina at Chapel Hill, is a visiting assistant professor of race, religion and politics in the department of religion at Syracuse. Before joining the New York school, Goodwin had completed a visiting assistant professorship at Elon University in North Carolina and a Mellon post-doc in innovative and creative pedagogy at Bates College in Maine.

While online spaces can increase women's vulnerability, the class and its project did “allow young women an entry into political discourse,” she said. Female participation in politics is difficult even under liberal administrations, she added. The course also helped female students maneuver the minefield of social media.

A print journalism graduate from Boston University, Goodwin was a sophomore when the Monica Lewinsky scandal broke. The coverage of that event led her to rethink her career path. “After that happened, I had no desire to be part of the media,” she said.

She went on to earn a master's degree in women's studies from New Jersey's Drew University and later a second master's in religion and culture from UNC. Her research focused on ways that gender and sexuality influence mainstream American interactions with contemporary minority religions.

Her interest in religion stems from her upbringing in Philadelphia. She grew up in an Irish Catholic family and spent 13 years in parochial schools. “My mom's family had a tendency to ‘find Jesus’ every few years,” she quipped, noting that there were both nuns and Baptists on that part of the family tree. Her father, she noted, was a “straight Irish Catholic.”

An interest in combining religion with pagan studies was quickly curtailed when her advisor, whose work was in religion and magic, told her that doing that type of research would limit her job options. She was able to explore her interest in the pairing while at Bates.

Teaching a Religion and Monsters class, Goodwin had her students conduct a live-action role play for their final exam. The Bates students designed their own monster costume and their weapons based on what was found in the required readings. This type of assignment required them to access higher-level thinking.

“At Bates, I was able to do some interesting stuff to see what works,” she said. “I find students work best when they get to do projects they're excited about doing.”

Women who want to post about religion and politics must have a sense of how social media works and a very thick skin, noted Goodwin.

After reading the article about the application of BuzzFeed, Goodwin thought it would be a way to “translate the work done in the classroom for a broader audience.” The BuzzFeed assignment showed her students how to put themselves into situations where they needed to make others care about the work.

The assignment also worked to build up students' media literacy, which Goodwin had begun earlier in the course. She had her students tweet the debates and then fact-check them, posting the sources using Genius. The tool allows users to annotate how closely what someone says aligns with what's reported.

In addition to the Election class she taught, two of her other courses—American Minority Religion: Goddesses, Guns and Gurus and Black and Blue: Religion and the Regulation of Bodies of Color—focused heavily on the intersection of race and religion and supporting her current research interests.

Readings and discussions on those topics were often heavy and very painful to get through. “Last semester, I had only one day where no one died in the readings,” she said.

As a rule, when she teaches, Goodwin meets with all of her students enrolled in any class above the 100 level. “For the first time ever,” she said, “I found myself telling them how hard it was for me to work with this material [and] I can't imagine how hard it is for you as a black student.”

The 2016 presidential election was the first one where her students could vote and was the only political arena they knew. That was coupled with the “real-time unfolding of issues” surrounding the campaign and “no firm ground” on which to base the Election course. She found that her lesson plans were changing from week to week based on current events.

Freedom and democracy don't happen automatically, said Goodwin. They must be built. For the students, the experience of taking those classes while world events caused uncertainty was hard for all of them but resulted in a “really tight group” of learners.

While she interviews for full-time positions, Goodwin regularly returns to Portland, Maine, to see her husband, an IT professional. She is working on a book, Women and Children Last: Sex, Abuse, and American Minority Religions.