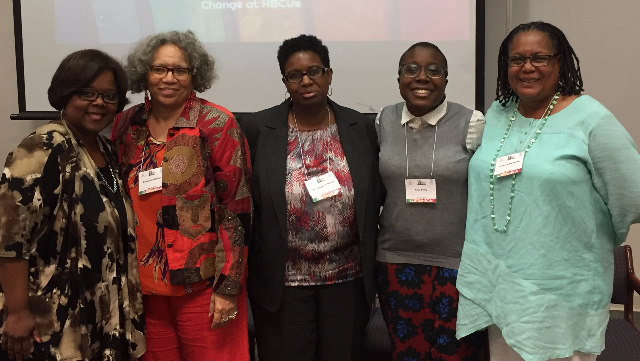 Conference co-organizer Dr. Moya Bailey, a Spelman graduate and currently a women's, gender and sexuality studies postdoctoral fellow at Northeastern University's NULab, says participants were most excited about connecting with people from other institutions and building a network. There were also opportunities for faculty to meet people from administration, some of whom came from the same institution and didn't know one another.

“We had faculty members who feel that they now have some tools and resources to go back and actually talk to their institutions,” says Bailey. “There's a network of people who are interested in these issues.

“There is a real desire and a need for connection across institutions about our experiences and what we want our campuses to do now,” she adds. “There is a need for HBCUs to stay relevant and stay connected to where the movement is growing and the conversation is. It demands that people take LGBTQ issues seriously on their campuses.”

There was talk of the heavy course loads professors and instructors often have at HBCUs. Alleviating some of the pressure on faculty will give them time to re-envision courses and develop more LGBTQ content in the curriculum.

Attendees saw a connection between having such course content and campus climate. “When you have classes where students feel comfortable and feel like their identities are affirmed, it permeates the college campus as well,” says Bailey.

In addition to creating inclusive and diverse atmospheres for students, it's important for institutions to be supportive of a diverse faculty population. Bailey says this alleviates the pressure on students to constantly be the ones pushing the institutions for LGBTQ inclusion.

“Symposium participants were energized by the candor with which presenters and the audience were willing to speak openly about challenges, best practices and future projects,” says Dr. Beverly Guy-Sheftall, Anna Julia Cooper professor and director of the Women's Research and Resource Center at Spelman.

Among HBCU institutions, the Women's Research and Resource Center at Spelman has the longest history with respect to addressing LGBTQ issues. In addition to addressing sexuality issues within the comparative women's studies major and having offered the first black queer studies course, several years ago Spelman received a grant from the Arcus Foundation to examine institutional climate issues around diversity, inclusion, gender and sexuality at HBCUs.

“The symposium built on the research generated during the Arcus project by engaging in a range of issues—curricular, advocacy, policy—that impact HBCUs in unique ways,” says Guy-Sheftall.

In panel one, Fostering Inclusive Campus Climates, Dr. Michael Shutt, assistant dean for campus life and director of the office of LGBT life at Emory University GA, spoke about how alumni should be brought into discussions of LGBTQ issues. At Emory, interested alumni have been crucial in making sure LGBTQ students have a voice and feel welcome.

In panel two, Teaching Queer Studies at HBCUs, the panelists discussed the kinds of classroom environments they want to create. Even simple language and examples used can either create or destroy an inclusive environment. Faculty should be mindful not to make assumptions about students' sexuality or gender identities.

“[Try] to make sure you're thinking through the language that you're using as a professor,” Bailey says.

In the final panel, Strategies and Recommendations, Dr. Evelynn M. Hammonds, professor of the history of science and of African and African American studies at Harvard University, said it's essential that college and university boards see some of the videos that enlighten LGBTQ issues.

Two such videos shown at the symposium were “Bursting with Light” by Spelman alumna Taryn Lee Crenshaw and “My God Too: Black LGBTQ Students Speak OUT,” which was produced by Many Voices, a black church movement for LGBTQ justice, in partnership with Morgan State University.

When trustee boards don't see these kinds of images, they aren't fully aware of the complete picture when making decisions on critically important issues. Being fully informed, the board becomes an integral player in transforming campus climates.

Spelman's partner for the symposium, the Annie E. Casey Foundation, is interested in doing another event in 2017.