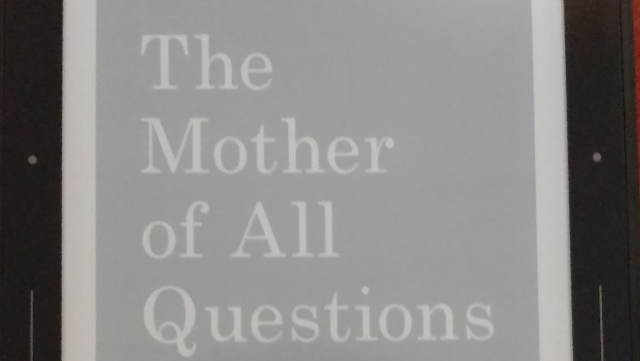 I started Rebecca Solnit's The Mother of All Questions (Haymarket Books, 2017) on International Women's Day, March 8, which was also the Day Without a Woman protest/strike organized by the national Women's March organization. The organizers encouraged women to take the day off from labor at both work and home. If women couldn't afford to take the day off, we could wear red, not shop and, if we had to shop, choose women- and minority-owned businesses for our purchases.

Even though I can pretty much dictate my own schedule most weeks (a rare privilege that most women don't have), I couldn't take the day off. Upcoming travel intersected with my deadlines for WIHE. I had articles to edit and write, a column that wouldn't write itself and an event where 19 second graders dressed up and gave speeches as famous Americans. I helped my daughter's class with their research and speeches for two weeks, so I wanted to attend. I told myself that editing a feminist newsletter was an act of solidarity, and it is. But it didn't feel like enough.

Missing the strike bothered me, so I picked up Solnit's newest book as another act of solidarity.

The Mother of All Questions is an explicitly feminist book that looks closely and carefully at the consequences of patriarchy. It's a “tour through carnage,” an examination of the damage left in patriarchy's wake. Yet, it is also a hopeful book, “a celebration of liberation and solidarity.” Her focused examination of violence never dims her hope that our world can become better than it is now. This, I believe, is Solnit's superpower: confronting violence and trauma, the ugliness of our world, while remaining hopeful that we, through activism, interventions and resistance, can change the world. This ability is why I return to Solnit's books again and again and again. Patriarchy might structure our lives, but Solnit consistently shows that we can resist, fight back and make change. Her books show that we have a chance, if only we decide to take it.

Her essays consider the ruinous effects of patriarchy not just on women's lives, but on all of our lives: women, men, children and all of the folks “who are challenging the binaries and boundaries of gender.” The Mother of All Questions is a book I think all of you should read immediately.

The title essay alone is worth the price of admission. It's a sprawling essay that moves from Virginia Woolf and inappropriate questions to the impact of cultural conceptions of motherhood on women who have or don't have children to the common silencing of women to rape culture to masculinity to the danger of silence and the power of speaking up. There are also essays on the toxic masculinity of the internet and everyday life, men who explain Lolita (1955), the Centers for Disease Control and Prevention's bizarre guidelines about alcohol consumption for women, the radical power of art, and the effects of categorization and discrimination.

In Men Explain Things to Me (2014), Solnit considered how women are silenced, which is a thread she picks up again and expands in this book. She writes, “Silence is what allows people to suffer without recourse … [a]nd the history of silence is central to women's history.” She insists again and again that the ability to speak and be heard is essential to human rights. If a culture silences women, then that culture doesn't consider women to be fully human. Silence “was the historic condition for women,” and now, Solnit finds power in the women who refused to keep quiet. Their broken silences have led to dramatic changes in how we understand rape, domestic violence and sexual harassment.

Like in Men Explain Things to Me and Hope in the Dark (2005, 2016), Solnit offers up sharp cultural analysis of this moment we happen to inhabit, with attention to where we've been. She can see where things stand now and show how much progress we've really made, if it doesn't seem like we've made any. She writes, “I'm old enough to remember the ugly old world before there was recourse for domestic violence, acquaintance and date rape, and workplace sexual harassment … old enough to have seen the world change because of insight and organizing and intervention.” And the world does change, the more we voice and name the oppressions we are forced to bear. Speaking up is a feminist act, and Solnit wants us to speak up more and stand firm in our opposition to patriarchy.

As I finished reading The Mother of All Questions, I read Gail Collins' “A Girl Stands Firm on Wall Street” column about the bronze statue of a little girl installed in front of the charging bull in downtown Manhattan. Despite the well-deserved criticism of the statue as a sign of corporate feminism, I'm drawn to “Fearless Girl” with her hands placed confidently on her hips as she stares down the bull. She's standing firm. She's unruffled while facing a creature that could easily trample her. There's a lesson here about women facing the patriarchy, looking directly at a force that wants to annihilate you. What would happen if we all became unafraid and unmovable? What if we all took up Solnit's call to speak out against patriarchy? That would be the beginning of a different world.