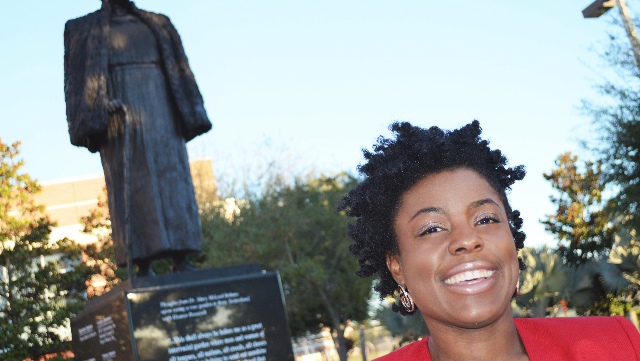 As the curator/director of the Mary McLeod Bethune Foundation-National Historic Landmark, Dr. Ashley N. Robertson uses public history to inform the present and future. Housed in the Florida home of the late civil rights advocate and landmark educator (1875–1955), the museum inspires everyone from casual visitors to students and faculty at Bethune-Cookman University FL.

As a college student at Bowie State University MD, Robertson majored in business administration with a concentration in banking and finance, with an eye toward the financial world. Despite her major, she piled on history courses—feeling a love for the subject but not knowing how she could make a career from it.

A professor/mentor opened her eyes to careers in history and guided Robertson through the application process for graduate school. After earning her MA in African American studies at Temple University PA and her doctorate in African diaspora history at Howard University DC, Robertson accepted a position at Bethune-Cookman University in 2013, where in addition to her museum duties, she is an assistant professor of African American history.

While doing her doctoral studies at Howard, Dr. Elizabeth Clark-Lewis advised Robertson to take an interest in the public history (museums/archives) minor. Clark-Lewis suggested she go to the Mary McLeod Bethune Council House in Washington, DC to volunteer. There Robertson learned about archival work and how to give tours. At that time, the Council House and the National Archives for Black Women's History were at one site. The volunteer work led to a paying job as an archives technician.

Her dissertation topic was Bethune's international activism—the founding of the United Nations; trips to Cuba, Haiti and Liberia; and the international studies she brought to Bethune-Cookman.

“The thing about a smaller museum is that your duties are [broad]. I'm not just a curator,” says Robertson. “I'm in charge of preserving the collections here and I'm also in charge of training the staff and making sure that they have information to do tours. Also, making sure that we're doing new research, so that we can learn about different aspects of Mrs. Bethune's life.

“I've created several community programs here, including ‘Books and Bears,’ which is a literacy program in which we have children come every month and students from Bethune-Cookman are paired with the children to read with them and do various activities,” she adds.

A sought-after speaker, she has also written about Bethune, including Mary McLeod Bethune in Florida: Bringing Social Justice to the Sunshine State (2015). In the book, Robertson included interviews with four people now in their 80s and 90s who actually knew Bethune. One was Bethune's grandson, 95, who grew up in the house that is now the museum.

“It was extremely important for me to capture their stories and preserve the memories that they had about Mrs. Bethune,” says Robertson, who also hopes to turn her dissertation into a book. “Spreading her ideals, especially her ideas about living a life of service and getting involved in the community. Being involved here in Daytona Beach has been something near and dear to me as far as sustaining Mrs. Bethune's legacy.”

The book also looks at the founding of Bethune-Cookman University in 1904 and Bethune's use of the school as a political space and the site of some of the first interracial meetings in Daytona Beach. Robertson uses it in her class, and last year it was the common reader for the freshman class.

Robertson promotes the museum and Bethune's legacy through lectures and presentations. She is also active on social media, seeing it as an important way to connect with young people.

“As a scholar, you would hope that everyone is going to read your articles and books or watch your documentary,” says Robertson. “The great thing about public history is that historians are allowed to make everything in the books come alive. We're allowed to have a conversation about Mrs. Bethune through a re-enactment or we're allowed to take an object that belonged to Mrs. Bethune, such as her cane, and we can talk about the cane and where the cane has been.”

Recently, Robertson wrote a grant proposal for the Florida Humanities Council to have an actress that portrays Bethune come to campus. The event kicked off Black History Month. People connect to history in a diverse range of ways, and the re-enactment was attended by children, university students and members of the local community.

“You're like an interpreter and you can translate things for people in a way that they're able to understand,” she says. “Right now is a very important time for people to understand history, become familiar with it and also use it as a way to move forward in the future and learn from the things of the past.”

Robertson sees museums as places where critical conversations about issues of the day can take place. She says it's important for museums to develop programs that address community issues.

As a young academic at a historically black university at this moment in history, Robertson sees this as an exciting time. Informed by her studies of the challenges Bethune faced and how she interacted with everyone from local leaders to U.S. presidents, Robertson feels prepared to implement what she's learned by organizing and spreading knowledge.

“My role is to produce scholarship and also to train others to become purveyors of history,” she says. “I'm also responsible for making sure that my students leave my class not only with facts, but also with inspiration and strategies.”