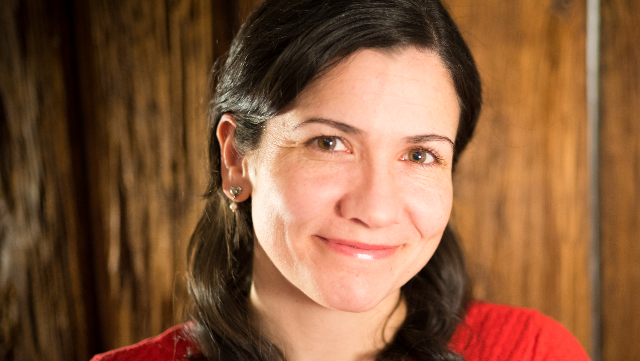 “Every day I am more and more amazed by the democratic potential of community college,” says Dr. Carolina Chaves-O’Flynn, assistant professor of Spanish at Queensborough Community College NY, one of 25 institutions in the City University of New York (CUNY) system. “I believe that in order to achieve educational equity and true social justice, the most educated people must teach those who need it most.”

Chaves-O’Flynn’s path to being a full-time faculty member took her from her native Colombia to New York, back to Colombia and back to New York, through graduate school and 11 years of adjunct positions. She finds teaching individuals seeking access to higher education both challenging and fulfilling.

“I know the students need me and I can be helpful for them,” she says. “Sometimes students don’t know how talented they are. For me, it is absolutely fulfilling to make them discover how much potential they have. To see them grow is really satisfying for me. … I hope I’m going to be here for the rest of my career.”

Chaves-O’Flynn says from a young age she felt misunderstood by her teachers. She was shy and anxious, so she was not an active participant in class. Her reticence was mistaken for contempt or lack of interest by teachers, which was completely untrue. She enjoyed learning and was attentive to everything going on in the classroom.

“Oddly enough, I always thought that I would do anything but teaching,” says Chaves-O’Flynn. “After a lot of dealing with my fears and anxieties, I know that I could not do anything else that would make me as happy as teaching. I connect very easily with students, understand their uncertainties and offer them an alternative path of self-knowledge that nurtures critical thinking and political agency.”

She earned her master’s degree and doctorate at schools in the CUNY system, which was quite the contrast to her undergraduate experience in Colombia, where she was only able to attend because her mother taught there, permitting her free tuition.

During the years she was working toward her Ph.D., she spent hours each day commuting from one institution to another for adjunct and contract jobs teaching various levels of Spanish—from basic grammar to advanced literature. She persisted because there was no turning back after investing so much of her life, time and money into higher education.

“It’s such a perverse reality for adjuncts,” she says. “They work so hard.”
She completed her doctorate in 2017 and in 2019 got her tenure-track position at QCC.

At QCC she teaches a variety of Spanish courses. This semester, she’s teaching intermediate Spanish. Last fall, she taught a course for Spanish-speaking students about topics from Latin America. The students had roots in Central and South America.

“We liked to cover topics in our classes that are related to the reasons why they or their parents had to immigrate to this country,” says Chaves-O’Flynn. “I’m thinking about a course on cinema with Latinx topics about the fights that Latinx have in this country. So, it’s related to their own realities.

“We as a Hispanic community—even in my college—are seen like a homogeneous mass,” she adds. “I would like the department to be a multicultural unit and celebrate these discussions for distinct heritages.”
More discussion about language is necessary, notes Chaves-O’Flynn.

“When we talk about language, we talk about race,” she says. “It is absolutely connected. We are underestimated just because we have accents.”

At QCC Chaves-O’Flynn encounters students who don’t only serve as language translators for their families, but also translate the American experience. She says, “They carry the weight of their experiences from a very early age.”

Many of her students, even the documented students—CUNY allows undocumented students to enroll—have dealt with a lack of a sense of belonging in this country, and she tries to empower them through language so they feel proud of their heritage while also embracing their place in American society. This issue emphasizes the racial and political struggles non-English speakers encounter.

“We all have to overcome language barriers, not only the immigrants,” says Chaves-O’Flynn, who is lobbying QCC to add writing-intensive courses in Spanish, Chinese and French. “We’re talking about equity and making the college more fair for the students. The whole position about language has to change in our community.

“It seems to me that cultivating bilingualism among students can facilitate communication between the most vulnerable populations in this country and the upper echelons of government, usually occupied by monolingual white, Anglo-Saxon individuals,” she adds. “I imagine my students creating change in positions such as immigration attorneys, judges, teachers, elected officials and, why not, as future presidents of this country.”