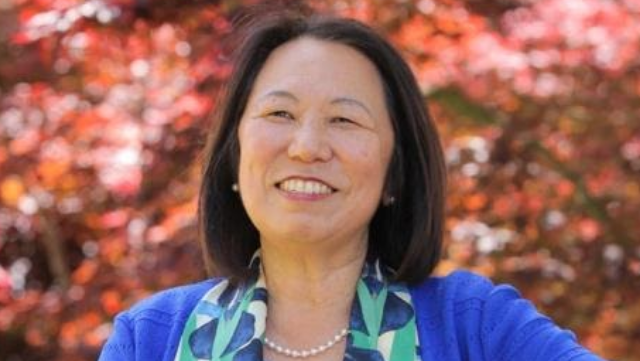 Dr. Judy Sakaki was appointed President of Sonoma State University in July 2016. She is the nation’s first Japanese American woman to serve as president of a college or university.

Describe your job in one sentence.

How has your leadership style been shaped by being a first-generation college student and the first Japanese American woman to lead a college or university?

My leadership style is shaped by my experiences of the challenges that first-generation college students, women and people of color face on college campuses and in life. People often have certain images of what a leader looks, sounds or acts like. It is not just the responsibility of diverse leaders to adapt and develop leadership styles that fit expectations, but it’s also the responsibility of others to broaden their understanding and acceptance of… what leadership looks like.

What were the significant educational and professional steps in your career trajectory? How did previous positions prepare you to serve as President of Sonoma State University?

Early in my career, I was curious to learn how a university operated and how decisions impacting students were made. I got elected to serve on every committee within the Academic Senate on my campus. I learned so much that it encouraged me to pursue my doctoral degree…

My experiences serving as a vice president and vice chancellor for student affairs prepared me well to later serve as president of Sonoma State. There is such a wide range of issues that you grapple with in student affairs. …. I worked with students and their parents, managed emergencies, created a strategic plan, assessed services, managed budgets, handled personnel issues, gave motivational speeches, inspired others to do their best and fundraised. Those experiences prepared and strengthened me to be an effective president.

In 2017, you lost your home in the California Tubbs Fire. How did you cope with this personal loss while continuing to fulfill your duties as president?

Not only did I lose my home and every single thing I owned, but I also almost lost my life… I never in my worst nightmare could have imagined this, yet somehow, I mustered the strength to run…

We were so fortunate that just when my husband and I thought we wouldn’t survive, an off-duty firefighter found us and saved our lives. We’re forever changed by this horrific life experience.

What was amazing was the care and the wonderful support from members of the campus community and total strangers. That is one of the signatures of Sonoma State. We had 80 faculty, staff and students who also lost their homes. We created a program and got laptops, books and clothes for fire victims… I was living in one of our residence hall apartments. I knew all eyes were on me, and I could not fall apart. As a president and a community leader, I needed to step up and demonstrate [that] we could go on…
We have a beautiful performing arts center on campus, and community members suggested we hold a fundraiser for first responders. I thought long and hard about being a role model and the responsibility that comes with leadership. I spoke about how difficult it was and going for counseling to heal.

Under your leadership, Sonoma State has seen a significant increase in the 4- year graduation rate and the 2-year graduation rate for transfer students. How have you and your teams worked to improve student outcomes given your emphasis on access, affordability, inclusion and success?

I believe in the strength of teams. When I came to Sonoma State, I was interested in creating a student-centered community. It didn’t matter what your job was—a grounds person, a food service worker, an advisor or a dean—how we show up makes a difference in the lives of students… If everyone has this sense of student-centered responsibility, then we lift our students and our campus…

We also created structures—we have a transfer and transition center, beefed up our advising, reach[ed] out more intentionally to students and [made] sure we have classes that support students at times they want them.

You have noted the importance of “lifting as you rise” and the few role models available as you developed your career. What mentors or sponsors had the most impact on your professional development? How do you prioritize mentoring?

I did not have any mentors who looked like me. I found there were many people who may not look like me, but who would care and provide support. Things are changing slowly in the academy in terms of role models. The number of women presidents and chancellors is still about 30% and changing little. The number of women presidents of color is even fewer.
When I receive a request from a doctoral, master’s or undergraduate student to mentor, I accept. I also chair the American Council on Education Women’s Network. We’re creating a pilot mentoring program. For all who may think, “I don’t know if I should go for that position,” I would say, “Just try it, go for it.” Listen to your mentors and others who may see something in you that you don’t yet see in yourself.

You’ve remarked on how implicit bias regarding your Japanese background surfaced during your career. How did bias show up and what did you do to confront it?

I have experienced implicit bias and overt racism at every step of my career. It’s hurtful. When people say, “Why are there so few Asian American women in these leadership roles?” I smile and could say, “Do you want to see the scars on my back?” I maintain that if I were six feet tall and male, I don’t think they’d ask me that question. We still have that bias and the stereotyping that makes it harder to excel in these leadership positions…
For a long time, I tried to be the role models I saw—white women. I’d see this assertion, this aggression… that was not my personality. I thought if I aspired to be a leader, I needed to be more like them.

Early in my career, I went to lunch with the then Chair of the Academic Senate and told her that I’d been watching her because I wanted to be more like her. She said: “Judy, that’s really interesting because I’ve been watching you and want to be more like you.” I couldn’t imagine this. [She said] “You don’t speak as often as I do, but when you speak, people listen to you… and when you go into a meeting, you know what you want and you don’t leave until you get it.”…Later in my career I said to myself, “This is who I am, right? I can be an effective leader with these skills, this personality, these cultural values and traits.”

What impact did your family and upbringing have on your career trajectory?

So many of these Japanese traits, gaman, to just tough it out. This came out of the internment, shikata ga nai, some things just can’t be helped. Pivotal values have helped me, this perseverance, this strength. My mother and father used to say, “Tsumoreba yama to naru.” The translation is, “Even the tiniest particles of dust, when you gather them together, can create a mountain that enables others to climb higher and see farther than you ever dreamed possible.” … These sayings have stuck with me.
How have you addressed combatting anti-Asian hate among anti-racist stances at Sonoma State University?

The president of Santa Rosa Junior College is a Chinese American man, and the superintendent of the Santa Rosa public schools is a Japanese American. We wrote an op-ed piece for the Press Democrat. On campus we created, “Brave Spaces,” and town hall meetings where people could come together… I participated and communicated to the campus community… creating an awareness, being that role model [and] creating spaces on campus for people to ask questions or be with each other in community.
When I’m walking around, I’m not the president of the university, I’m just an Asian American woman. All the issues of race and our racial reckoning in this country have raised these issues… We need to educate each other.
An alum left a voice message which said, “I will never give a penny to a ‘J-p from an internment camp.’” It’s very threatening. We didn’t do a good job of educating this person if he’s out in the world saying these kinds of things… I go back to that Japanese saying, “tsumoraba yama to naru,” every little thing we do can help create that mountain that will make us better… We’re about educating and lifting students to understand difference and learn from… each other.

What would you recommend to WIHE readers interested in pursuing a CEO role in higher education?

Go for it, prepare yourself and follow advice. Get several mentors, shadow people [and] think seriously about what you’re less comfortable doing… Whether it’s making your way around a room, or speaking in front of 100, 500 or 1,000 people, get comfortable doing it…. Push yourself out of your comfort zone… Be strong and stay flexible so that you can bend and adapt…[to] challenging, sometimes unpredictable circumstances.
This interview has been edited for length and clarity.