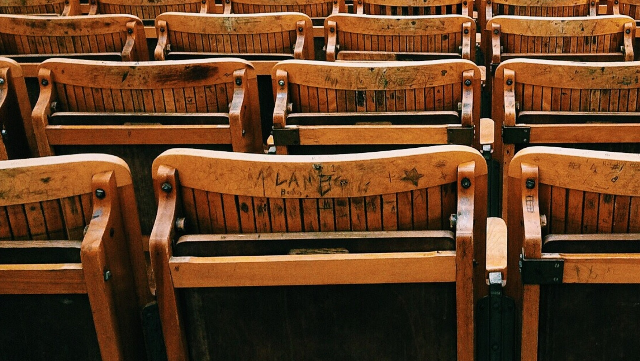 When Netflix released its comedy-drama series The Chair in August, I saw it as a necessary, but complicated win for the English field. While the show was a much-needed cultural boost for the humanities—an area that has had declining undergraduate and graduate enrollment since 2012—the show’s buzz comes at the expense of parodying the university politics that have very real consequences for individuals working in the academy.

As the show poignantly demonstrates, English departments have often had to innovate and revamp themselves beyond teaching classics such as Chaucer and Melville to garner student attraction to the major.

But, under the more apparent problem of declining student enrollment that the show draws readers in with during episode 1, “Brilliant Mistake,” lies deeper issues: women of color’s struggle to assert their leadership and teaching capabilities, the complexity of the free speech movement swirling through campuses and the uncertainty faced by aging professors about their job security, among other complications.

Sandra Oh stars as Dr. Ji-Yoon Kim, the first woman chair of the English Department at the fictional Pembroke University. Day one in her new role finds Dr. Kim already tasked with cutting three faculty members because of their too high salaries and low enrollment across the department; corralling in writer–professor Bill Dobson (Jay Duplass), who is struggling in the wake of his wife’s death and his only daughter’s departure for college; and pushing for rising star Dr. Yaz McKay’s (Nana Mensah) tenure in the department.

All of Dr. Kim’s responsibilities center around the series’ multi-episode controversy between Prof. Dobson and Pembroke students after the frenzied professor goes viral when his class rant on absurdism and fascism ends with a satirical Nazi salute. Shortly after the incident, students gather to protest and demand a public apology from Dobson, shouting “No Nazis at Pembroke!” The professor hosts a town hall in which he offers praise for the students’ complaint and acknowledges the university as a place to “uphold free discourse” and “the exchange of ideas without fear.”

However, Dobson only goes as far as apologizing for how the students feel, not his actions, prompting the dean, Paul Larson (David Morse), to call on Dr. Kim to resolve the issue or suspend Dobson. Here, the zeitgeist of free speech protests on American college campuses takes center stage as Dobson’s Nazi gesture illuminates how a statement’s intention versus impact can get muddled.

And although the students mistakenly take the Nazi salute as hate speech coming directly from Dobson, The Chair’s creators Amanda Peet and Annie Wyman reveal just how quickly “cancel culture” can prohibit open discussions that might lead to clarification and greater understanding across differences of expression and opinion.

Lack of Diversity and Parity

In the immediate backdrop of Pembroke’s free speech crisis is the English department’s ongoing lack of faculty diversity and parity for women academics. For example, senior faculty member Joan Hambling’s (Holland Taylor) 32 years of service to the department still ends with her office being moved to a cramped office in the athletics building, yet her men peers of similar rank were not moved. When she takes her grievance to the Title IX office for resolution upon Dr. Kim’s counsel, the office’s sole staffer asks if Prof. Hambling has talked with the chair, implying it is a man.

“Her,” Hambling corrects, to which the staffer jestingly replies, “Sorry. Her. Maybe I should write myself up.”

The scene is an amusing critique on multiple levels about the fact that less than 20% of women are chairs of academic departments, the disparate treatment of women faculty compared with their men colleagues, and the limited and sometimes inexperienced staff hired to run major units on campus such as Title IX. Hambling’s dissatisfaction with her situation grows to the point that she begins to collude with the same men colleagues she mentioned earlier in the Title IX office to raise doubts about Dr. Kim’s ability to serve as chair.

Prof. Hambling is not the only women academic in the department sidelined by Prof. Dobson’s crisis and overall enrollment-influenced decisions. Initially promised a distinguished lectureship by Dr. Kim to support her tenure docket, Dr. Yaz McKay discovers the lectureship will instead be given to a famous author, a white man, whose scholarship is outdated. But because the dean believes the guest lecturer will raise students’ interest in taking English classes, Dr. Kim has to choose between serving as gatekeeper to tenure for McKay—an exceptional Black woman professor and the only other woman of color besides Dr. Kim—or giving in to the whims of the university-turned-business.

The Perils of Running the University as a Business

The slight against McKay becomes even more egregious when McKay begins to suspect that the senior faculty member in charge of overseeing her tenure process, Elliot Rentz (Bob Balaban), may not deliver a glowing letter of support. This is, perhaps, due to his own gripe that students engage more with McKay’s fresher, modern approach to teaching Melville, his decades-long area of expertise. Again, Dr. Kim appears to fail McKay, who eventually receives another distinguished lectureship and job offer from Yale.

Those familiar with the market forces influencing academic department chairs’ decision-making are all too familiar with the decisions Dr. Kim faces, especially as women academics (and graduate students such as Dobson’s TA Lila) bear the brunt of the burden to keep universities running like corporations. She must report to the Pembroke dean about department- and university-level decisions, advocate for colleagues, mentor and address student concerns at higher rates and attempt to retain the only other women of color in the entire department, all while facing contempt by senior faculty members Hambling, Rentz and John McHale (Ron Crawford) after they catch wind that they may be facing early retirement.

After I finished the series, I couldn’t help but notice how sections of the plot could be taken from various English department happenings around the country. Some viewers on social media went as far as humorously calling The Chair a “documentary” to emphasize the extent to which the creators portrayed Pembroke as a fictional stand-in for many American universities.

In this light, The Chair suggests that universities should reconsider the ramifications for its women, minority and older students, faculty and administrators in their incessant striving to increase their bottom line.

Tiffany Pennamon is a freelance writer and graduate student at the University of Florida.