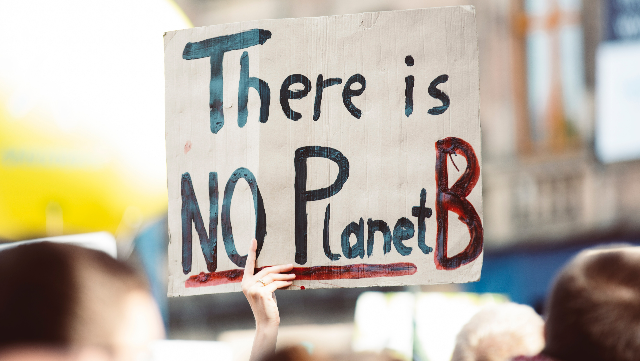 There are two news stories that I can't get out of my head. They've haunted me ever since I first read them. One is about the pandemic. The other is about the climate crisis. Both involve young people and what they face in the present and in the future.

The first article ran in The Boston Globe, and it is about the children orphaned by the pandemic. The numbers are staggering. Globally, around 1.5 million children lost parents or caregivers. The Center for Disease Control and Prevention estimated that 120,000 of those kids reside in the U.S. It's important to remember that this number is likely a low estimate; the real number could be even higher.

Part of the issue is the rapidly spreading and remarkably contagious Delta variant. Another part is that this variant seems to mostly infect unvaccinated people under the age of 50—the people who are the most likely to still have children at home. Unvaccinated parents die. Their children are orphaned. Each instance is a tragedy in an already tragic time.

As every day passes, I hear about more unvaccinated people—my age and younger—who contract Covid-19, are hospitalized, and then die, leaving behind not only children but other loved ones as well. These losses were preventable. If only these parents and caregivers were vaccinated, this might not have happened. In the Globe, Renée Graham writes, “If it's unnatural for parents to bury their children, it's no less an abomination for kids to be robbed not only of their parents or caregivers, but their fragile sense of home.”

There's already a generation of kids who entered college this year—and will enter college for at least the next 15 years—after spending over 18 months learning from home with their parents and caregivers or possibly alone. Within this generation are kids who lost parents, family members and caregivers, and they are in K-12 education and college right now. They are a generation of kids who have experienced life-altering losses. This is a major generational shift, and its impact will reverberate long after this pandemic is over and other pandemics appear on the horizon. The current pandemic will not be the last one that they experience. This upcoming generation has watched as over 700,000 people have died from Covid in the U.S. These deaths weigh as heavily on children as they do on adults.

It's a catastrophe that they are all living through and can't escape. Adults, of course, can't either.

Of course, the pandemic is not the only catastrophe that young people are facing right now. There's the climate crisis too. ABC News reported on a new survey of young people's understanding of and feelings on climate change. This survey followed the Intergovernmental Panel on Climate Change (IPCC) report that painted a dire future for our planet and emphasized that some of the changes to climate are irreversible already. The sea level is rising, and temperatures are too. Without large-scale, immediate intervention, these changes—particularly the heat—will seriously impact on both our health and agriculture.

Young people are paying attention to this crisis. Of the 10,000 youth surveyed, between the ages of 16 and 25, researchers found “widespread psychological distress” about the climate crisis as well as anxiety over political leader's lack of action on climate change. Over 45% noted that “their feelings on climate change negatively affect their daily life and functioning.” Sixty-four percent emphasized that governments “are not doing enough to avoid a climate catastrophe.” Sixty-one percent claimed that governments, globally, are not protecting the planet, all of its inhabitants or even the generations to come.

Young people know that we are in a climate crisis that will only be mitigated if there's some immediate action. Individual action is not enough; national governments have to intercede before more irreparable damage is done to our planet.

The climate crisis is another catastrophe that we are living through, and young people know it.

So, what should education be when the future is dire for students?

We are living through multiple catastrophes simultaneously. There's mass death now and the possibility of mass extinction later. We have and will have students who grew up in a pandemic and will live through future pandemics and those who grew up with emerging climate catastrophes and will continue living with them. They are our current and future students.

Higher education has to address what's happening now and a possible grim future. It has to change to match our reality now.

It should be addressing these catastrophes not only in casual conversations, invited panels and campus events but also in the classroom and at the institutional level. The university has to transform to address current catastrophes and prepare young people for an uncertain future. That's going to require a radical refashioning of what higher ed is now because these are not the students that we are used to. It is our job to meet them where they are and tackle the challenges—the pandemic, future pandemics and climate change—they are facing head on.

It's our responsibility to address our catastrophic times and to act, to intercede, to make our students' futures less grim. And we have to start now.