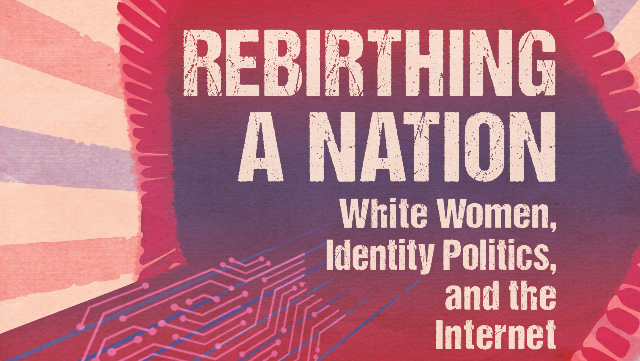 An independent researcher and instructor with a focus on the intersection of rhetoric and digital media, Dr. Wendy K. Z. Anderson examines how rhetoric about and from marginalized communities and critical dialogue influence institutional, organizational and infrastructural oppression to impact equity and social change.

Her recently published book, Rebirthing a Nation: White Women, Identity Politics and the Internet (University Press of Mississippi, 2021), describes the role of white nationalist, alt-right and conservative white women's messages in preserving white supremacy. She details how racist rhetoric and web design are tools used by white women, and she references conservative political personalities who amplify the message.

“The amplification and the rationalization of white supremacy has really gained ground and been mainstreamed, first through white nationalist women, but then through folks like Sarah Palin when we see the Tea Party movement,” says Anderson. “The rhetoric became so palatable.”

Anderson says critical race rhetoric addressing marginalization and using terminology that identifies the impact of that marginalization on underrepresented populations has been co-opted and used to argue a victimhood of whiteness in order to gain ground for white supremacy.

“When you look at things like Twitter, people…will take a tweet and amplify it sometimes not recognizing the source or context,” she says. “The extra work we have to do as scholars sometimes is to recontextualize what people said and how they said it.”

The book was initially inspired by a graduate school course Anderson took on extremist rhetoric on the internet. There was an assignment to research a group online, and the professor suggested she research something with which she didn't agree.

This led to her dissertation in which she looked at white nationalist women—their values, ideologies, classifications and the ways they constructed their media infrastructure—in order to understand their web presence. After completing her doctorate, she continued to expand upon the subject for the book.

“What I really wanted to do was gain a depth of understanding for how uses of language, gated communities (such as discussion groups) and what I consider apologia, or the defense of white supremacy, would be emulated within what people would consider more popular spheres or political spheres,” Anderson says. “When I think about this book, I hope it serves as a reckoning of how we process racism infrastructurally and understand how racism gets built into our systems.”

“Any new medium, you're going to have a cultural shift that parallels it,” Anderson says. “It became really fascinating to see how white women are trying to potentially use alternative media to construct identity and existence because of our ‘other’ status. Digital media becomes one where people think, ‘Maybe I can own this space.’ The hard thing is it really depends on who has access to different outlets and who can amplify materials.”

The coding of language allows white supremacy to continue, she says. This involves making the language seem mundane. By example, talking about the values individualism, diversity or equality.

“In the book, I talk about how that term diversity has been co-opted by white nationalists and alt-right members in order to argue their own diversity, argue their own blood purity as a form of diversity and preserving diversity,” she says. “Watching that argumentative shift contributes to how white supremacy becomes popularized because people…want to feel that they know their identities.”

Anderson examines both content and form and looks at different representations. In Rebirthing a Nation, she explores how white nationalist women use colorblind racism within the digital space. She says it's coded through language in the digital design, in particular how they identify certain values in ways that don't covertly negate people of color. Instead, what it will do is bolster an ethnic identity that codes whiteness.

Anderson also cites gated communities in which women can control who has access to their online conversations by having gateway pages, such as private groups on Facebook.

“It creates this echo chamber of identity that allows people to feel very comfortable, but the challenge is if we're too comfortable we're not learning and growing,” she says. “When I think about colorblind racism, it's built into not only the content but the form of the ways in which we create a sanitized space.”

In her analysis of argument class, she'll have students look at Twitter exchanges between Nicki Minaj, Miley Cyrus and Taylor Swift.

“Twitter, in particular, has made an argument over the last 10 or so years about their abuse policy or what they consider to be freedom of speech or dialogue because their rules…influence the ways people are allowed to engage with one another,” Anderson says. “Not only is there…the number of characters allowed, but also the ways in which they shift the rules of engagement based on communities they hope to support.

“Additionally, we'll look at how the mechanics work, in particular how we see these exchanges go back and forth and what becomes popularized through this kind of current of material,” she adds. “Each medium, whether it's a certain type of app, is going to function differently. So, we look at the flow of that medium.”

Anderson is pleased that Rebirthing a Nation is published by a university press. She is currently an instructor in the department of communications at the University of Minnesota, Twin Cities. It is challenging to constantly be seeking funding and publication, she admits, and she is seeking a long-term tenure opportunity.

“If we think about academic work as developing wisdom, sometimes projects take longer than the tenure cycle that's presented,” she says. “I think about this book where I'm trying to engage racism as a white person. The time needed to develop that project in order to be something that is substantive and not reductionist or repeating the same things that I had read over and over again in the field meant that I needed time to critically contemplate difference and engage material.”

To learn more about Rebirthing a Nation, please visit: https://bit.ly/3y9OR4x.