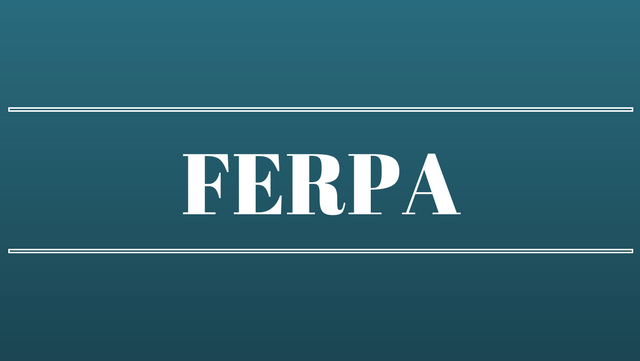 In last month's column, I wrote about how one university used the Family Educational Rights and Privacy Act (FERPA) to legally, but unethically, access a rape victim's campus medical records. The school pulled her records to prepare for a lawsuit that the school believed the rape victim was going to file. As a consequence of the school's unethical action and the ensuing fallout, the U.S. Department of Education issued new FERPA guidelines for how schools should handle medical records, giving medical records greater protection against university overreach.

This story shows a particular dark side to FERPA: how a school could use FERPA as a tool for gaining access to information about students that it did not have a right to have and as a tool to acquire information in an unethical manner.

Another dark side to FERPA

But there is yet another dark side to FERPA, one that seems antithetical to the unethical acquiring of information. Schools also use FERPA as a way to unethically block access to information that is strongly in the public interest—and, incidentally, not protected by FERPA.

Unfortunately, this unethical information-blocking also often arises in the context of campus rape. Here's an example.

In September 2016, the campus newspaper of the University of North Carolina at Chapel Hill, The Daily Tar Heel, formally requested specific records relating to campus sexual assault cases. According to the paper, “The request specifically asked for all records of people found responsible for rape, sexual assault or misconduct by University entities.” The university refused to meet the request, citing FERPA.

In response to UNC's refusal to release the records, the newspaper filed an official public records request under North Carolina law. (This request was joined by other media organizations.) In response to the public records request, the university's vice chancellor of communications stated that “UNC is firmly committed to FERPA regulations” and that “Carolina has a profound responsibility to protect and vigorously defend the privacy of sexual assault victims and all students, including witnesses, who may be involved in a campus Title IX process.”

Let's take a look at the issues at play here. On the one hand, the university has declared it must use FERPA to protect assault victims and witnesses, and therefore it cannot release the records of assault proceedings. That seems like a legitimate reason to withhold records, right? To protect the innocent.

But let's remember—the newspaper only requested the records of the proceedings in which the accused was found responsible for wrongdoing. The stated purpose of the records request is to hold the university accountable for investigating and punishing campus rape. The newspaper stated that it doesn't even know if records of this kind even exist. It doesn't know if any students at all have been found responsible for wrongdoing of this kind.

It seems that no one outside of the university administration has information about anything regarding these issues—and that's the problem.

According to the National Women's Law Center (NWLC), the law on this issue is clear. FERPA allows schools to disclose “the final results of any college disciplinary proceeding for a violent crime or sex offense that concludes the accused broke a school rule or policy to a third party. Examples of third parties include witnesses, student groups, or reporters.” Thus, under the law, the initial records request by The Daily Tar Heel was not barred by FERPA, as the paper only requested results of proceedings in which a student was found responsible for wrongdoing, and the request was made by a reporter.

Furthermore, according to the NWLC, the school can only disclose the names of other involved students—such as the victim or witnesses—if they consent in writing. It appears that the University of North Carolina has no FERPA-based reason to withhold the requested records from the media, and they are quite capable of releasing the records without releasing the names of victims or witnesses. They just don't want to release the records.

According to attorney Frank LoMonte, executive director of the Student Press Law Center, although FERPA was “intended to protect only the confidentiality of ‘education records,’ the law has become a catchall excuse for educational institutions to avoid accountability.”

In other words, UNC, like all universities, has a strong interest in keeping the results of student conduct hearings private. What if, in the years the records were requested, not a single student was found responsible for misconduct? What if, during those years, students were found responsible, but their punishments were so light that the university would be embarrassed should the punishments come to light? What if high-profile students, such as athletes, were involved, and they were allowed to remain on campus?

The administrative cover-ups on college campuses around student misconduct are almost as egregious as the misconduct itself. No school wants to be the next Baylor. Is it any surprise that universities will use a highly complex law to block media inquiries? Sportswriter Jessica Luther, author of Unsportsmanlike Conduct: College Football and the Politics of Rape (2016), encounters pushback from universities under the guise of FERPA so frequently that she's taken to using FERPA as a verb: “I got FERPAed.”

FERPA, though important for the protection of the privacy of our students, has become a tool to protect the reputation of universities—often at the expense of students. Protecting universities was never FERPA's intended purpose, and it is time to stop putting a school's reputation before student safety.