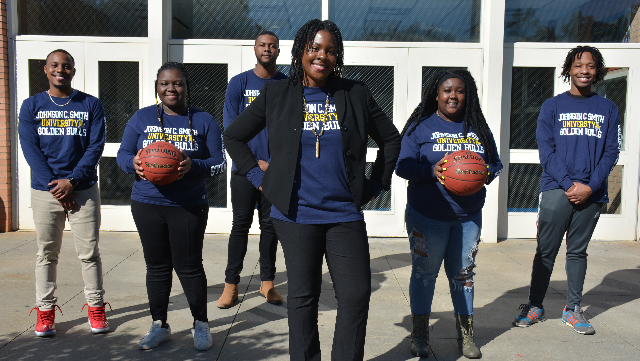 It seems improbable that a storied Black institution had not previously had an African American professor in its computer science and engineering department, but that was the case when Johnson C. Smith University (JCSU) NC hired Dr. Felesia Stukes in 2017.

“I do think it raises an awareness of what it's like for the field overall,” Stukes says. “There is still, within our field of computing, quite a bit of firsts.”

The dearth of African Americans in computer science is unfortunately self‐perpetuating because the pipeline is not effective. All too often, students of color with an interest in computer science migrate to another major where they feel more accepted and valued.

“Retention is a huge problem, so to retain a person of color to the point of faculty level is not the norm,” says Stukes. “It takes a lot of mentoring.”

“[The middle school teacher] was very nurturing and very encouraging of me in that course,” says Stukes. “I was able to transfer that into using a computer because that was a skillset that made me more natural on a desktop computer in high school.

“In high school, [the teacher was] a Black female, and that helped me identify with the profession, connect to what we were doing and not shy away from it,” she adds.

She read through college catalogs to learn what was involved in studying computer science. Stukes also realized how crucial a supportive environment is to succeed in a demanding field, which is why she tries to cultivate such an environment for JCSU students.

For a few years after college, Stukes worked as a software developer but wasn't getting the career satisfaction she wanted. She earned a master's degree in information technology and soon found a job as a community college faculty member. The work/life balance of higher education was appealing, and she aspired to do research, so earning a doctorate was her next step. That led her to JCSU.

Stukes says she loves the world of higher education and the creative possibilities. That includes crafting learning experiences outside of the classroom. She encourages students to engage in research as well as doing internships. Students have accompanied her to conferences, so they're exposed to new ideas.

“[JCSU] students are so multi‐faceted and they're so humble,” Stukes says. “It's an amazing mix of personality, character and talent.”

Stukes says that HBCUs (historically black colleges and universities) train the majority of people of color in STEM fields. “That's a huge responsibility for HBCUs to make sure that our curriculum is up‐to‐date, relevant, emerging and can address all the industry needs that are constantly and consistently evolving,” she says.

Under her direction, in 2018 JCSU was awarded a $149,466 grant from the National Science Foundation to fund the development of a minor in data science. Data science is an interdisciplinary field that utilizes computing to extract insights from data to derive social and economic value. Although she didn't receive the three‐year grant originally requested, the funding for one year allowed Stukes to explore best practices and strategy.

“A data science minor is cross disciplinary, so it can come from different perspectives,” Stukes says. “I did come up with a plan that could be proposed when the campus is ready to move forward, which is happening now. Our new dean supported that we move forward with the formal proposal for the minor.”

A data science minor will enable students to acquire skills that will enhance whatever major they choose. Stukes says it will increase their viability in the job market.

Stukes has done some faculty training for any faculty who wanted to learn new techniques related to data science. She also hosted a sports analytics‐themed data science workshop for K–12 educators.

When Stukes attended a National Society of Blacks in Computing conference, she discovered a tech tool called ShotTracker, a sensor‐based system that delivers real‐time stats, shot charts, zone maps and analytics. Students were advised to consider the athletics department as the client. The DATA Bulls interacted with the players and coaches on the men's and women's basketball teams, using ShotTracker‐powered statistics and analytics to improve on‐court performance.

She followed that with a grant from the Department of Defense HBCU and Minority‐Serving Institutions Research and Education program for a project titled Data Science Education and Sport: Equipping the DATA Bulls, which was aimed to increase minority participation in computing through data science education and research through sport.

“Students are using data that is derived from sports analytics equipment,” says Stukes. “It's coming from our own teams, so they have more of a connection to the data and the people.”

Desirous of knowing what the students are experiencing, she connects with them so she can give the best support and encouragement possible. Stukes also gets out into the community to show she is a Black woman, wife and mother who works in computer science. That modeling behavior has impact. She also crafts multiple creative pathways.

“Because we have such a high demand in computing, but low participation, one of the ways to address that is these creative pathways,” says Stukes. “I look at the next generation, which is really personal to me. That's why I hit the ground running with finding funding. That has been part of my drive.”

Photo: Dr. Stukes and some of her data science students