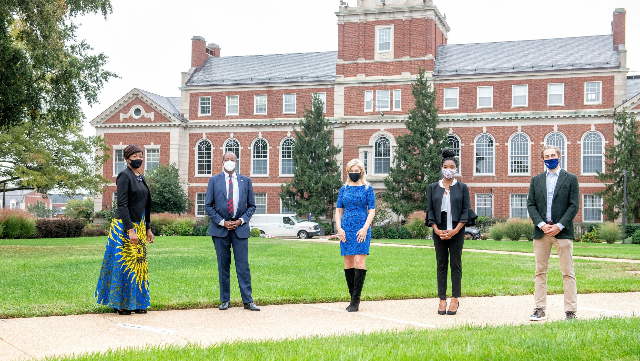 The election of Howard University DC alumna Kamala Harris to the office of Vice President of the United States has put a spotlight on the historically Black university's development of confident and capable leaders. That impact will be amplified in the coming years with the launch of the Center for Women, Gender and Global Leadership, which was announced in mid‐November 2020 following a $1 million gift from Heather and Jim Murren.

“It was a perfect combination of planning and the perfect outcome,” says associate professor of political science Dr. J. Jarpa Dawuni, who will be the director of the Center. “The donors were already planning to do this irrespective of the election outcome. It was just so beautiful how it happened.”

Dawuni, associate professor of political science, a Fulbright Specialist Scholar and Carnegie African Diaspora Fellow, has taught at Howard since 2015. She earned a certificate in women's studies and an MA in international development studies from Ohio University and a PhD in political science from Georgia State University. She earned a JD in Ghana, West Africa, before coming to the United States.

Her research examines gender issues. When she found that she wasn't connecting with other faculty also doing research on or teaching gender issues, Dawuni and a colleague co‐founded the Women's, Gender and Sexualities Collective in Howard's College of Arts and Sciences in 2016.

“Through this collective, we've been promoting, having events and engaging with students and faculty,” says Dawuni. The collective has celebrated United Nations' International Women's Day, which falls on March 8, and brought in speakers, including Sandie Okoro, senior VP and general counsel for the World Bank Group.

This work across campus caught the attention of the administration and eventually led to her involvement with the Center. It began with her preparing a proposal for the Murrens, followed by a formal presentation over Zoom, which led to the generous gift.

The academic focus of the Center for Women, Gender and Global Leadership will include research and creating a data center on issues of women and gender in the United States and the global Black diaspora. Student scholarships and internships will be offered. Also, students will be matched with high‐impact women leaders, entrepreneurs, industry experts, policymakers and social justice advocates for mentorships and sponsorships.

“I'm a very collaborative person,” says Dawuni, who will continue teaching in addition to her director's role. “The vision, from when this was being conceptualized, is to provide a center and spaces for interdisciplinary research and also for student engagement.”

The Election of Kamala Harris

Dawuni described the lead up to the 2020 U.S. presidential election as “exciting, confusing and tense.”

“[In the fall semester] I taught an Introduction to Political Science course, and I arranged my syllabus in such a way that the week we were talking about elections was when the election was being held,” says Dawuni. “It provided me the opportunity to tell the students how the political system works.”

“To have that discussion the week of the election was intriguing for students to understand what was going on. It really provided an opportunity to have those discussions in real time as the elections were unfolding.”

She anticipates researchers addressing the impact of Harris' election in the months and years ahead. This will include gender scholars and people who study American politics and analyze the data connected to the election.

Howard has developed many leaders and contributed to U.S. and global diversity, Dawuni says, and to have a direct connection to the first woman elected Vice President, particularly one who represents multiple ethnicities, is exciting. “It has reinvigorated what the Howard mission is, which is to prepare students in excellence, ready to take leadership and, in this case, service to the nation and the world,” she says.

Building for the Future

The Center will develop a database of excellence including Black women and other women of color. A consortium of HBCU institutions will be developed. PWIs desirous of participating in the theoretically based research will also be invited.

“Everything the Center does is going to revolve around students—preparing and enhancing our students' academic achievements now and then their goals and aspirations for the future,” says Dawuni. “What that will mean is [to] prepare them academically and through the Center provide them with training, opportunities, networking, internships and scholarships that will prepare them for the market once they graduate.”

“On the faculty side, we are looking to engage actively in research,” she continues. “Some of this will be ongoing research that faculty have. But then we're also looking to build what we call the collaborative research network, so that faculty can get together to do interdisciplinary research and apply for grants.”

There will be community engagement within the Washington, DC metropolitan area and nationally. Another component is to engage globally such as through study abroad programs. There will also be international scholars invited to the Howard campus.

Dawuni says women's and gender studies issues are constantly shifting and evolving. At Howard, its mission is to prepare students to understand the Black‐lived experience.

“We are constantly challenging perceived knowledge and most importantly producing new knowledge that speaks to the reality of Black people,” Dawuni says. “Even within what we call the Black experience, those experiences are very different. We're hoping the Center will address issues that speak to the lived experiences of not just Black people within the United States, but Black people wherever they may be located. There are many issues of Black people in Latin America, the Caribbean, Europe and Asia.

“We're hoping to be broad‐looking and intersectional in our approach and to define new ways of thinking and new research themes on issues that confront racial minorities.”