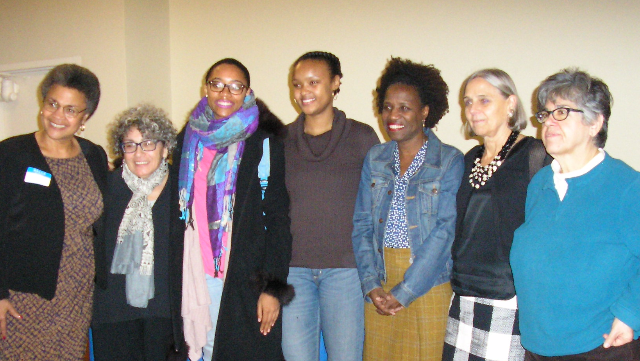 One week after the presidential election, approximately 150 people from around the New York area gathered at Barnard College NY for the event, “Activism in Context: An Intergenerational Dialogue on Organizing in the Shadow of the 2016 Elections.” The event was hosted by the Barnard Center for Research on Women (BCRW, bcrw.barnard.edu), a center that has combined academics and activism since its inception in 1971.

More than one year in the planning—albeit with a different electoral outcome anticipated—the event provided a showcase for two films created by members of Barnard's Class of 1971 (bcvoices.org). In 1968, the Columbia University campus across the street erupted in protests against the Vietnam War. Many Barnard students participated in the protests and found their lives changed by the experience. In the years after, they also found themselves immersed in the feminist movement.

The Barnard alumnae envisioned these films as oral histories of the late 1960s/early 1970s and how those experiences propelled their activism over the past 45 years as well as a way to create intergenerational dialogue about consistent themes in activism and organizing. While those in the audience were similar in their displeasure with the outcome of the presidential election, they did represent considerable diversity in age, degree of activism, perspective, sexual orientation and gender identity.

Moderated by Katherine Acey, BCRW senior activist fellow, the panel included three members of the Class of 1971 and three current Barnard students. While DaMonique Ballou, Class of 2017, hesitates to call herself an activist, she says staying in tune with the past and future is essential in all forms of engagement. She wants to learn from her elders and know the path they traveled that led them to making an impact.

Specifically, Ballou wants to know how previous members of BOSS (Barnard Organization of Soul Sisters, founded in 1968) handled archiving information efficiently, so she can have that knowledge while also adding her own distinctive approach. She also understands that before she graduates she needs to encourage younger students to keep up the work.

Janet Price, Class of 1971, a lifelong political activist, says it is important to share perspectives on what feminists have achieved, what remains undone and what rights are in jeopardy, particularly after this election. Direct to the point of the event, she feels it is essential for people to get out of their bubbles and listen to others who aren't exactly the same, but may have common interests.

Price notes that this event shares “the history of feminist struggle with the young women who are inheriting the struggle” and helps participants to better understand “each other's values, struggles and priorities to create an agenda women of all ages can unite around.”

BCRW Director Dr. Tina Campt says that in planning the event, several people noted they felt a disconnect between earlier generations of activists and young activists. What defines an activist is also a question raised. One commonality is that each one is striving to be a change agent. Thinking collectively is the point of crucial conversation that is needed in order to move forward in a mutually supportive manner.

Acey, executive director emerita of the Astraea Lesbian Foundation for Justice, says activism is on a continuum and everyone has the potential to be an activist. For her, there is a distinction between activism and organizing.

“Sometimes, the connotation of activism is that you have to be in the streets or you have to be doing something massive,” Acey says. “Certainly, demonstrating, particularly at a political time like this, is very important, but it's not the only thing, nor should it be the only thing that activism gets defined by.

“There are many different ways to be active,” she continues. “One is working in an academic setting, for example, and working towards being inclusive and open. Or one is doing cultural work, either through theater or writing. When you're speaking truth to power, that to me is a form of activism.”

Each table of attendees was asked to discuss four questions: How does change happen? How do you see yourself as a change agent? What kind of support would you like to get from others? What kind of support will you give? The evening concluded as representatives of the various tables gave some of the key points, ranging from speaking out and respectfully informing people with whom you interact to being accountable and holding others accountable.

This is a moment that is ripe for people needing and wanting to be in a community. Acey says even without the election, there is a benefit to people being able to share what they're thinking and feeling, and colleges and universities can play a vital role by creating spaces where people can engage in conversation.

Ballou says she sensed a shared feeling about wanting to work together to figure out what the next steps are. This event allowed people to come together at various stages of activism and age to share, learn, decide and continue to question.

“In the future, I'd hope to have more direct conversations of activism,” Ballou says. “It would be a space for sharing experience to assist and motivate current and future activists and forms of activism.”

Price encourages other institutions of higher learning to hold intergenerational conversations. She hopes some schools will host intergenerational viewing parties to see the films produced by the Class of 1971 and discuss their own experiences.

“Encourage and sponsor both alumni and current students in creating oral history collections,” says Price. “Use reunions to mix and match different classes for intergenerational conversation.”

Acey's two years as a BCRW senior activist fellow were very enlightening and dispelled myths about older and young activists not wanting to interact. She says the activists of her generation are still open to learning and taking in new ideas as well as giving support and sharing histories that help inform what people are doing today.