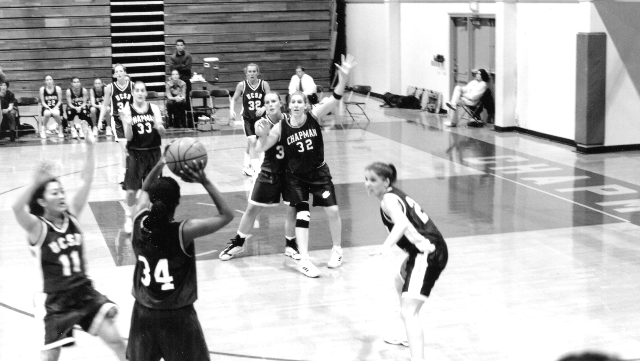 What if former athletes could show you how they learned the life lessons that fueled them through their careers? The documentary film After the Game: A 20 Year Look at Three Former Athletes (2020) does just that.

After the Game chronicles the 1999–2000 season of the women's basketball team at Chapman University CA. The film's director/producer/editor April Abeyta was a member of the basketball team while studying film and television production. She shot the interviews, and game footage was shot by fellow film students. She juxtaposed the vintage footage with recent interviews with two of her teammates and the team's head coach, in which they reflect on the impact sports have had in their lives.

Due to COVID‐19 and social distancing, the film's release has been adapted. Abeyta had hoped to screen it on college campuses but instead is having virtual screenings with colleges, universities and nonprofit organizations, followed by Q&As with the filmmaker and the documentary's subjects.

The Goal of the Film

“Our primary goal with the film right now is to encourage girls and young women to play sports,” says Abeyta. “It's not the end goals that are most prevalent today, such as a Division I scholarship or going pro.”

The school played in NCAA Division III, which does not have athletic scholarships. Then and now, Division III student‐athletes play for the love of their sport and a love of competition. Abeyta wants to spotlight the lifelong benefits that sports provide, regardless of the level at which they're played.

Discouraged by the research that shows a steep decline in girls' participation in sports when they hit puberty, she wants to remove some of those barriers. “There's no guarantee it's going to make your life great, but there's a good chance it's going to help elevate some qualities … that you wouldn't have really had the confidence to explore further if you didn't play sports,” says Abeyta.

Her senior basketball season didn't end the way Abeyta and her teammates had hoped—they didn't earn a spot in the Division III NCAA Tournament—but she always felt there was something in the story left to tell. In 2017, the story took shape as Abeyta filmed the lives of former teammates Michelle Ruzzi , an entrepreneur and new mom, and Polly Neves , a marketing executive contemplating a career move, as well as their former coach Mary Hegarty , who had left coaching for athletic administration and was trying to reach her own full potential.

Love of the Game

When Abeyta filmed her teammates and coaches 20 years ago, her initial goal was to give exposure to women's sports. “As an athlete myself, just getting respect could be frustrating,” she says. “I wanted to show whether they're at the top D I programs in the country or smaller programs that no one's ever heard of, these women are competitors; they work really hard.”

Abeyta's intent wasn't necessarily to show the value of Division III, but a more general message about unknown programs in a variety of sports for which the student‐athletes are putting in a lot of effort and have a deep commitment to what they're doing.

Basketball gave Abeyta a sense of community during college. The unspoken rule was teammates had each other's backs. “What you learn to do is respect everybody and work together,” she says. “Also, when you love something, you put in the work.”

In 1999–2000, Ruzzi was fighting for playing time, finally earning a starting point guard spot her senior year. The Ruzzi of 2017 was contemplating launching a new business while juggling motherhood. Her business partner didn't know much about basketball but agreed Ruzzi's leadership characteristics were totally representative of a point guard. “She had that quality in her, and sports elevated it,” says Abeyta.

“You set a goal for yourself and it may take a lot longer than you think it will—this film is another example of that—but you can make things happen and it's going to be out of your comfort zone,” says Abeyta. “That's the parallel I tried to draw with Michelle.”

Abeyta appreciated Hegarty's words of wisdom 20 years ago and says to this day she offers inspiring messages. In the film, Hegarty spoke candidly about her disappointing time as a Division I coach and her decision to leave coaching, which provided insight into the world of college athletics. Sports provided Hegarty the resolve to endure disappointment but persist until she found something rewarding. She is now the athletic director at Santa Ana College CA.

Team sports provide insight into team dynamics that come into play in virtually every workplace. “Maybe you don't always see eye to eye. You still work together and have the ability to collaborate so you can achieve that common goal and celebrate each other's successes,” says Abeyta. “In sports, you're able to test yourself in these microcosm environments and you're able to gain that confidence.”

The time at which Abeyta was playing basketball and creating the genesis of this film was a time before selfies and social media, so getting people comfortable and open in front of the camera took some time. It was to her advantage that she was a member of the team. Not giving up on the project over the years reflects the persistence she gained from sports.

She hopes that young athletes and their parents view the film so they can see how sports translate to life. Also, as schools consider cutting sports due to the budgetary impact of COVID‐19, she hopes this can sway rash decisions.

“What we're focused on for the summer is private virtual screening events,” says Abeyta. “We work with a coaching staff to set up a window of time where they get a link that's specific to their team. Then they have a team meeting [to discuss the film] and we make ourselves available.

“We're talking about positive messages for them to think about, which I think is really relevant given they're going through some trying times right now.”