Resolve to Make Life Better for All of Us 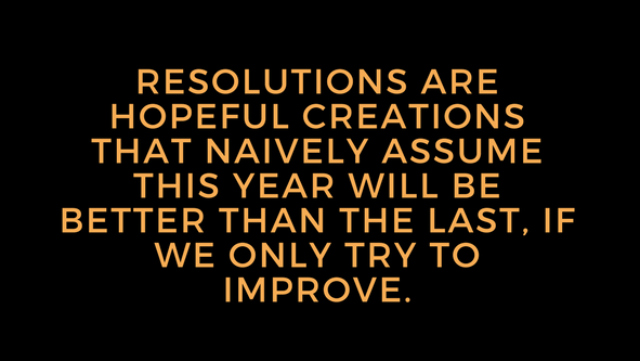 It's the beginning of a new year, a time when many folks reflect on their lives over the last year and resolve to improve themselves by offering up New Year's resolutions. According to Business Wire, the top-five resolutions for 2016 were: enjoying life to the fullest, living a more healthy life, losing weight, spending more time with family and friends, saving more while spending less and paying down debt. I'll be honest: this practice of making resolutions often grates on my nerves.

The problem with resolutions

Last year for WIHE, I wrote about one of the problems with resolutions, the assumption that each individual must always be improved. In each of the most popular resolutions, our selves appear less than, flawed and broken. If only we could lose weight, save more money, spend more time with our families and not just enjoy life more but enjoy it to the fullest, maybe then our lives would be better, maybe we would finally be enough. Resolutions tell us to improve; we're never quite the people that cultures and capitalism emphasize we should be.

Resolutions are hopeful creations that naively assume this year will be better than the last, if we only try to improve. Resolutions assure us we can control what happens to us through willpower, diets and saving. Resolutions suggest that individuals are responsible for our own destinies and conveniently forget the institutions and structures that limit and bind us. The project of self-improvement is easier than building a better world.

But, at the beginning of 2017, a year that follows the remarkably hard 2016 (described as a “dumpster fire” on Twitter), resolutions feel like one of the last things we need to care about. What do resolutions matter when the world around us feels imperiled?

Too many other things capture our attention: the increasing number of hate crimes; a campaign pledge threatening to create a registry of American citizens who happen to be Muslims; hard-fought reproductive freedoms that might be overturned; the fate of undocumented students on our campuses; the likelihood of the continued federal enforcement of Title IX on campus sexual assault; more generally, higher education's fate in the forthcoming administration; bills about bathrooms that target trans* people and their continued political and legislative support; the rights of LGBTQ folks that some threaten to overturn; the president-elect's Cabinet appointments and their impact on our nation's relationship to other nations and our local communities; this particular administration's impact on global climate change and denigration of science; and so many other concerns.

To say that I'm worried and overwhelmed about what will happen in the coming year is an understatement. Making resolutions feels like the worst response to what lies ahead. How can I resolve to do anything that improves only my life when so many people are fearing for theirs? Resolutions keep the focus on me, or you, rather than us. We need to put the focus on all of us; we need to figure out what we can do together to make life better for us all.

A new resolution for what's to come

Instead of resolving to make our individual lives better, this year, we should resolve to make life better for everyone, especially the most vulnerable among us. For 2017, I'll be resolving to improve the lives of others by working toward justice.

I'm not arguing for melodramatic self-sacrifice here. You should be able to enjoy your life, but what I want is for WIHE readers, and everyone really, to turn toward activism on issues that matter to you and issues that matter to us as families, communities, cities, states and as a nation. But, this activism must be inclusive and reach beyond the communities we inhabit.

In “White Feminism Is Over If You Want It to Be” at the Pacific Standard, Melissa Gira Grant evaluates many of the current critiques of “white feminism,” the lean-in style of feminism that centers on the concerns of white women without considering what matters and concerns women of color. White feminism has long been about improving one's own social standing, but not necessarily anyone else's. Individual success mattered more than collective gains, so the fatal flaw of white feminism is the lack of attention to justice. We need intersectional feminism because justice is integral.

So, what can you do?

Resolve to improve life for everyone. Write it down on a Post-It note and place it on your desk where you can see. I need this kind of reminder; maybe you do too. Figure out how you can commit to activism, in ways both big and small, that will work for your life right now. It's easy to get overwhelmed by the amount of work that lies ahead of us. To start, pick an issue to work on and then strategize about how you can best use your time, energy and resources. Third, lend a helping hand to the activism your family, friends and colleagues commit to. Sign their petitions. Make calls. Send emails. Do what you can, but don't feel like you alone have to accomplish everything. And be loud. It's good to speak up. I resolve to be loud. I hope you do too.