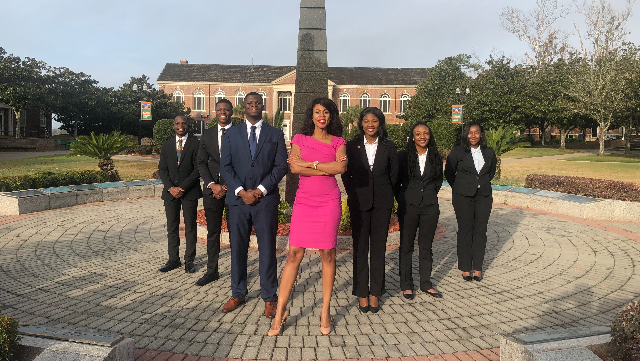 Florida A&M University, a historically black university founded in 1887, continually endeavors to give students opportunities to excel. In the early 1980s, it forged an unprecedented partnership with Florida State University, a predominantly white institution, to create the FAMU‐FSU College of Engineering.

Earlier this year, the FAMU‐FSU College of Engineering received a $1 million National Science Foundation (NSF) Retaining Undergraduate Engineering Students grant, which supports a new program called Educating Engineering Students Innovatively (EESI). The program targets sophomores and juniors, with the goal of improving success and retention, because those years are often overlooked when examining the persistence of engineering students.

Director of Student Access at the FAMU‐FSU College of Engineering Dr. Charmane Caldwell, principal investigator for the NSF grant, will lead the program.

The grant will provide multiyear scholarships for more than 40 students over the next five years. There will also be academic and professional development opportunities within four major tracks: industry, entrepreneurship and innovation, community engagement and research. The goal is for students to gain professional and technical skills that can lead to employment and/or pursuit of graduate degrees in areas in which they're interested.

“EESI allows students to take control of their engineering college experience, while faculty are able to engage a greater number of students,” says Caldwell. “The EESI program assists with retaining students in engineering by using their passions as a catalyst.”

Caldwell knew as early as fifth grade that she wanted to be an engineer. She recently found an old VHS tape with a skit she and some high school classmates did about where they saw themselves in 20 years, and she said she saw herself as a successful electrical engineer.

“Going into college, I was part of a program called FGAMP (the Florida‐Georgia Alliance for Minority Participation) that encouraged students to conduct research and pursue a PhD,” Caldwell says. “As early as my sophomore year, I started conducting research in a physics lab.

“Then, I went to a conference and I saw a panel of African‐American women that had their PhDs,” she adds. “I came back from that conference and said, ‘I definitely want to get my doctorate.’”

She has no problem understanding the obstacles her students face, because as early as middle school, and even today as a faculty member, she has navigated naysayers and others who doubt her ability to excel in engineering.

“I've realized that other people's biases or microaggressions have nothing to really do with me,” Caldwell says. “They haven't dealt with someone that's different from them.”

Caldwell attended the FAMU‐FSU College of Engineering for both undergraduate and graduate school, and at times was the only woman in a class. Family members, role models and allies were influential in her journey. When she became a faculty member and had the opportunity to develop and implement programs, she wanted students to have a compilation of all the things her support system provided her.

“I wanted to make sure that I created a space where students were comfortable to be themselves and, at the same time, challenge them while giving them the support they needed to be successful,” Caldwell says.

She has been a faculty member at the FAMU‐FSU College of Engineering for almost six years. To build effective programming, she took time to speak with students, faculty and department chairs, and examined policies.

“I started to see the leaks in the pipeline,” says Caldwell. “One of the very first things I saw was there wasn't a consistent math placement. If you don't place students properly in math and then they fail a math course, that is going to discourage them or make them think, ‘I shouldn't be an engineer.’ In reality, you were placed in a math course you shouldn't have been in. Working with FAMU and the math placement committee, starting in 2015 we had a new math placement.”

Then she saw issues with the first‐year engineering course, so she addressed how that was implemented—introducing more active learning and less lecture style. She also helped the school develop the freshman engineering living/learning community, where engineering students are placed on the same floor in a dorm, so they can interact.

The grant money will also fund peer‐assisted study sessions, in which upper‐level students will be hired to lead study sessions. There will also be faculty and alumni mentorship with the first cohort in fall 2020. Another key piece is funding to attend professional conferences. Just as Caldwell was inspired at a conference, she wants today's students to have access to role models.

The FAMU/FSU collaboration has the potential to be a leader in producing culturally responsible engineers of every race and gender. Caldwell says that while it's unquestionably diverse, the inclusivity still needs some work.

“As women and underrepresented minorities in engineering, it's not just good enough anymore to be invited; you have to create a climate and a culture,” says Caldwell.

Up until last year, she taught courses. In a first‐year engineering course, she told the students there would be projects and she would create the groups. When an FSU student asked if the FSU students had to be in project groups with the FAMU students, Caldwell made it clear they would work in groups and that was the purpose of the joint college.

“In the real world, you don't get to pick who's in your group; you have to work with everybody,” says Caldwell. “That is one of the things I think that draws companies to our school…. Companies like the fact that when students work on a senior design team or projects here, they're meeting a diverse group. So, when they go to work for these companies, it won't be a surprise.”