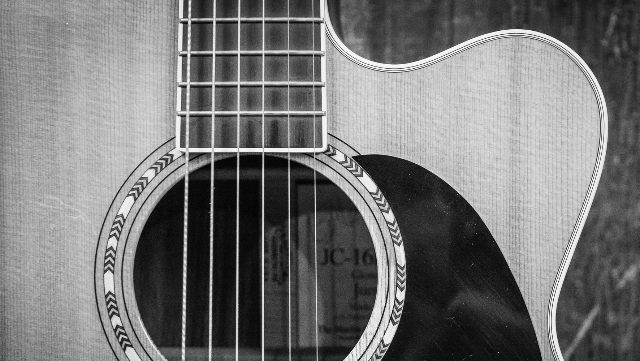 There's a guitar sitting in the corner of my office. It's been sitting there for months now, actually more than six, but who's keeping count? My father‐in‐law loaned it to me so, finally, I might learn to play. For years and years, I've wanted to play guitar, but I've never taken the time to learn. I always had an excuse. I didn't want to pay for an instrument I wouldn't use. I shouldn't be doing something fun when there's so much to do. The excuses piled up. I never picked up a guitar, even though I wanted to.

So, when I go in my office, I look at the guitar, protected by its dusty case, propped up against a bookshelf. I still haven't popped open the golden latches on the case. I still haven't picked up the instrument or touched its lacquered surface. I haven't thrown the strap over my shoulders. I haven't strummed its strings. I haven't done anything with it at all. It sits there. I imagine the guitar judging me for my inaction, my inability to pick it up and try.

It's not that I don't want to learn to play to guitar. I really do. It's more that I'm afraid of what might happen when I try.

I don't like to begin again. Being a beginner stresses me out because I like to know what I'm doing. I don't want to fumble my way through learning a new skill.

To learn to play guitar, I'll fumble as I figure out how to hold it and try to remember how my fingers should be in place for each chord. I'll have to practice a lot. It will be frustrating. I'll be bad at it. I'll want to give up. I'll fear that not enough practice in the world will make me good.

I'm afraid to begin if I might fail. Maybe, I tell myself, I don't want to learn to play after all. Why begin when you can avoid?

Being a beginner is frustrating, because you're trying something you never have before. It requires attempting something you'll likely be bad at for a while. Beginning is intimidating. You have to learn something so completely out of your wheelhouse that you don't know where to even begin. You have to try. You don't want to. It requires having enough faith in yourself to try. It means admitting you might fail. It also means admitting you might succeed.

It's Hard to Be a Student

So, I forgot how daunting it can be to be a student in a course in a new subject area. I forgot the abject fear that comes along with learning something absolutely new to you that you're not sure how to begin. I forgot how much practice it takes to become proficient, much less good, at a skill or subject. Learning something new can be so hard. I already know this, I do, but I forgot it applied to me too.

I remember the wide‐eyed looks of my students on the first day of class. Most of them had never taken a class in religious studies. Some of them were afraid. They had no idea about the subject matter or how to write for a religious studies course. Some of them were defiant. They didn't want to learn methods or theory of this subject matter. Some were bored already. And some were quietly freaking out as they worried if they would fail before they ever began.

As an undergraduate, I was one of those quiet, freaked‐out students in new courses. I sat wide‐eyed as the professor went over the syllabus, afraid that I couldn't do what was required of me. Later as an instructor, I would look at my students on the first day, assessing how they might feel. I knew how they felt. I had been there. I had sat in similar hard chairs in crowded classrooms and wondered whether I had what it took to succeed.

Learning something new terrified me too. So, I told my students that learning a new subject takes time and practice. I didn't expect them to be experts. And I wanted them to know I would guide them through the subject matter and give them opportunities to practice. They could do it, I assured them, if they were willing to have an open mind and try. I gave them the pep talk I needed. It was OK to be a beginner. We all have to start somewhere, so they started as beginners, and we moved forward together.

Our students are beginners. They don't necessarily know what to expect in our classes. They might be afraid. They might be indifferent. They might realize that learning can be hard and frustrating. It's something we need to remember. And yet, we can also show them that being a beginner, learning something new, can be exhilarating too. We can gain so much. We won't necessarily fail even if our start is shaky.

When I look at the guitar again, I'll think of all I'll gain by learning something new. I'll give myself the pep talk I gave my students. And I'll crack open the case.