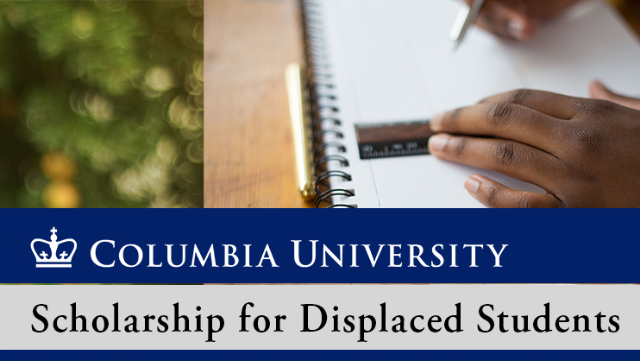 In early December 2019, Columbia University NY launched a global initiative specifically targeting refugees, asylum seekers and individuals with temporary protected status. It is meant to change the lives of displaced students in a meaningful way, giving them an opportunity to gain educations that will in turn help them make positive impacts on the world.

All 18 schools of the university are participating, making it the first universitywide scholarship program. Up to 30 individuals per year will have their entire cost of education, housing and living expenses covered.

Warda Sahtout, one of seven students from Syria who are part of a pilot program founded in 2016 by Bruce Usher at Columbia Business School, is in the second year of a master's program in economic and political development at the Columbia School of International and Public Affairs. The scholarship has enabled her to study the concepts of conflict resolution through new lenses.

Columbia University President Lee C. Bollinger led the creation of the initiative with Dr. Safwan M. Masri, executive VP for global centers and global development at Columbia Global Centers. Columbia has nine global centers all over the world in locations such as Beijing, Rio, Paris and Nairobi. These satellite locations run research, public education and public programs for the local communities, and Columbia faculty travel to the sites and engage with local scholars and nonprofit organizations. Also, some of the scholars come to Columbia's New York campus.

Attorney Linda Amrou, who previously practiced immigration law, is the program officer at the Columbia Global Centers responsible for overseeing the scholarship program. “I decided to go into academia to be able to build programs around forced migration,” says Amrou, who has been at Columbia for more than two years.

“[Institutions of higher education] are one of the primary, if not the primary, place of refuge,” she says. “Education uplifts them by giving the tools they need, not only through the classroom, but also through their cohort, their classmates and their community. It's a very unique place for people to discover their talents and also build networks that will propel them into their best future selves.”

The United Nations estimates that more than 70 million people around the world are currently living as refugees or asylum‐seekers or have been displaced due to wars and natural disasters. Some of these people are students—included among them the seven from Syria currently in the pilot program.

Administered by the Columbia Global Centers, among the goals for the scholarship program is shifting the dialogue surrounding displaced individuals and showing them to be vital contributors to global innovation. By involving all 18 schools of the university, many individuals from many areas of study—undergraduates and graduate students, from arts to medicine to economics—are impacted.

Amrou has been involved in developing the forms, the infrastructure and also the programming that will welcome the students when they come to Columbia. As an attorney, Amrou saw that people coming to the United States, especially under tumultuous circumstances, need support systems in order to integrate into a community.

“Our team is working hard to make sure that the students are well‐equipped to do their best when they arrive,” says Amrou.

Amrou says academia is a natural fit for her. As an undergraduate and a law student, she was deeply involved in diversity and inclusion issues, and she previously served as president of the International Law Students Association, which involved writing academic articles and lecturing about issues impacting law students around the world.

Each applicant needs to separately apply to the school he or she wishes to attend and for the scholarship for displaced students. The scholarship application will be considered after the applicant is accepted into the school. The cohort will be a maximum of 30 students each year.

“We've determined it's best for the schools to have independent ownership over who they admit based on their own standards,” says Amrou. “Once they've admitted their cohort, the Columbia Global Centers will manage the cohort during their tenure on the New York campus.”

It's open to foreign nationals with refugee status or who have applied for or received U.S. asylum—either currently in the United States or abroad—as well as individuals in the United States under Temporary Protected Status. They must explain their current situation and how the chosen degree program will help them achieve their broader goals.

“If you change the conversation around migration and educational accessibility, it has a network effect that multiplies,” says Amrou. “Also, these scholarship students bring a unique perspective onto campus and enrich the campus.”

Sahtout wants to work in the humanitarian field with the United Nations or an international organization. “I want to help as many people as I can,” she says. “I'm really concerned about children, because I believe if we invest in children, they are the future.… I want to focus on youth empowerment and global imbalance.”

Amrou hopes to see applicants who are civic‐ and community‐minded with a desire to give back to their own communities as well as to Columbia. Leadership skills are also highly desirable. In response to the assistance she's received, Sahtout has done her best to help other students who want to apply to Columbia, as well as those currently enrolled who are seeking scholarships or internships.

“It's our hope that by empowering those that come through the program we can help change their lives in a positive way and give them the opportunities they deserve, [which] they would have had if their educations and studies had not been disrupted by disaster and war,” says Amrou.