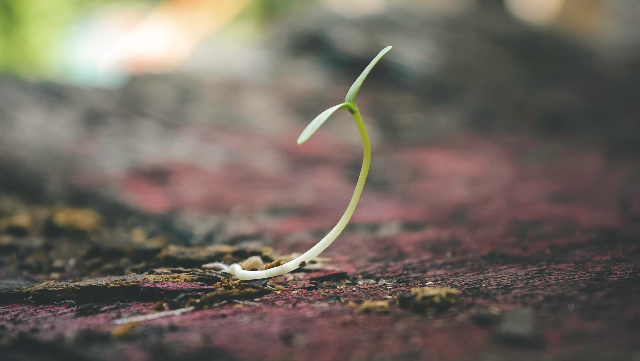 2019 wasn't a good year. The world seemed to be on fire. Multiple reports offered dire warnings about climate change and the fate of our planet. The Trump administration continued attacks on already marginalized groups of people. There was a backlash against #MeToo. And mass shootings remained harrowingly normal. The list could go on.

To say 2019 wasn't good is an understatement. 2019 was a pretty bad year all around, but also for me personally. Our dog had major surgery on one of her back legs and was stuck in a crate for eight weeks. My stepmother died suddenly of a heart attack. Amid the dog's long recovery and my grief, my family prepared for a move to a new town, which required selling our house and fixing everything that needed to be fixed.

I found myself in a constant state of worry and panic about everything else that could go wrong. I was mourning. I was angry. I wasn't sleeping even after the house sold.

For a brief moment, things were calm. I was relieved. Then, I sprained my ankle not once but twice. Children got sick and then better. Depression settled upon me and remained, until it didn't. I sprained one of my middle fingers. The glaringly obvious metal brace made it seem like I was flipping off the world. It was funny rather than tragic.

Again, I felt like I was catching a break. I wasn't.

A relative's chemotherapy for cancer stopped working; there were new tumors. Our 18‐year‐old cat passed away. I scrolled through the news on Twitter, day in and out, noting all the disasters. My personal disasters seemed small compared to those who lost homes in yet another wildfire or were detained indefinitely at the border.

If I thought the universe cared about me or the rest of its inhabitants, I would be offended. I don't think it does. I remain offended some of the time anyway.

Never have I ever been so ready for one year to be over and another to begin. It's not just a different year but also the beginning of a new decade, which feels like a fateful moment for a fresh start. January always feels a bit like a chance to begin again, which is why resolutions continue to appeal. Things can change; people can change, too.

Perhaps 2020 will be different than the year that came before. Hopefully, it'll be a better one.

Now, I'm not a Pollyanna. I'm not always glass half‐full. I'm more realistic, more practical and cautiously optimistic. I know that life can take a turn at any moment, but I don't assume that life is always hard, painful or overwhelming. 2019 didn't defeat me, even if I'm still struggling with all the previous year has wrought.

The Importance of Hope

My concept of hope, and my commitment to it, comes from Rebecca Solnit's book Hope in the Dark: Untold Histories, Wild Possibilities, first published in 2004 and reissued in 2016. Now, hope can often appear as wishful thinking not based in reality. But it isn't for Solnit. She isn't relying on a naive hope that everything will turn out fine—no matter what. Hope is different than we think. Solnit emphasizes that “we don't know what will happen.”

Hope, we discover, is based in this uncertainty. The future is unknowable, which gives us room to act. Hope is “the belief that what we do matters.” It's an acknowledgment that we can't predict what will happen or whether we'll make a difference. Hope is about possibility and potential. What we hope for, what we imagine, has impact.

The future is not fixed, and our actions, even the smallest ones, matter. What we do matters.

When I first read Hope in the Dark, it changed fundamentally how I understood hope and our capabilities to have something different than we have now. The future is uncertain and unknowable, so we can change it.

Our present doesn't necessarily have to become our future. We don't have to be stuck with political systems that oppress, white supremacist and patriarchal culture, institutions that grind us to the bone and our planet's decline. None of these is inevitable. When we hope for a different world, we make one possible. When we hope for a better year, maybe we can make that possible too.

As I reread the book, I was struck by the relationship between disaster and hope. Disaster ruins. It harms and kills. It leaves us in ruins. But in the aftermath of disaster, the seemingly unexpected can happen: cultural, and personal, change. This disruption can transform us. Disaster can shift our lives—worlds, too.

2019 was a disaster; one crisis piled on top of another and then another and another. Every time I tried to climb out of the ruins of the most recent disaster, more rubble fell on my head. And yet, I still climbed.

After these disasters, my life transformed. My future remains uncertain but can change. Something possible awaits in the distance. My hope existed in the ruins. And my hope about future possibilities and a different world for us, and me, led the way. I still managed to climb, despite the rubble, because I hoped.