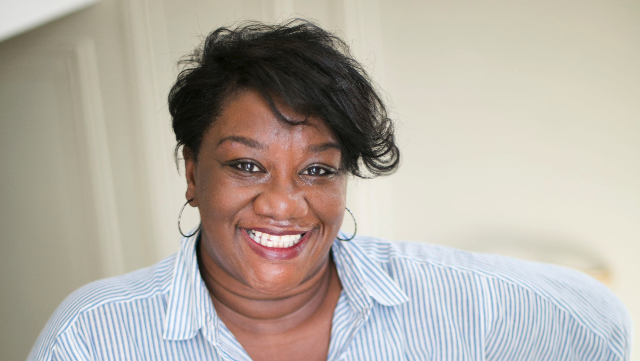 “It's the bee's knees of jobs,” Dr. Tressie McMillan Cottom said of her position as an assistant professor of sociology at Virginia Commonwealth University. “My worst day doing this job is better than my best day at any other job I've ever done.” Citing the variety of teaching, research and dialogue with colleagues, Cottom enthusiastically categorized VCU as “a fundamentally amazing community.” For this sociologist, author and higher education star, her optimism abounds in the face of what she classified as widespread translation work, the process of interpreting the hidden curriculum of higher education.

Cottom's own higher education story is rich with foreshadowing of her current work as a researcher and author. After she was accepted to her first choice of college, Spelman College, it revealed itself to be financially out of reach. She landed instead at an in-state, historically black college or university (HBCU), North Carolina Central University.

Looking back on her undergraduate experience, Cottom acknowledged that her selected institution did a good job of helping her with the cultural transition to college. “This is college and this is what that means. They said that verbatim,” Cottom said of her support system at NCCU. “All institutions need to do this. Translating college is a lot of work.”

Like many students, however, she stopped before earning her degree. Citing a possible mismatch with the institution, she later returned to finish what she'd started. In addition to earning her bachelor's degree in English and political science, there was another silver lining to this bump in the road. “I don't think I'd be doing what I do now if there hadn't been a mismatch,” she said. This sense of mismatch and the need for translation work fuels much of Cottom's current work. Dr. Cottom has three major book projects releasing in the coming months: her much-anticipated book, Lower Ed: The Troubling Rise of For-Profit Colleges in the New Economy (2017) as well as two edited collections, Digital Sociologies(2016) and For-Profit Universities: The Shifting Landscape of Marketized Higher Education (2017).

Cottom's success comes in part through support from others and her own intentionality around living her best life. She cited her mentor as a profound influence. When Cottom was deciding on graduate programs, Dr. William “Sandy” Darity pointed her in the right direction. “He said, ‘You are a sociologist,’” Cottom recounted. “He saw something in me that I could not yet see in myself.”

In addition to her mentor, Cottom draws a great deal of support from what she lovingly calls “Academic Twitter.” With over 25,000 followers, this professor, otherwise known as @tressiemcphd, can always find an answer from her online community. “I will mourn the day that Twitter ends,” she said with a laugh.

Though she's an unabashed advocate of social media, she does set clear boundaries around engaging with her students online. Citing her view that Twitter is as complex as it is powerful and as potentially harmful as it is helpful, Cottom generally doesn't engage with students on Twitter until after their graduation.

This mindful decision-making is woven throughout Cottom's personal and professional life. She describes herself as “fiercely protective” of her sleep schedule. Cottom spoke about her daily schedule with clarity and vision. Evenings are her creative time. “Writing at night is my sweet spot,” she said. Cottom manages both her time and her energy by setting clear boundaries. “I physically leave the office on Friday and set a ritual to say that the week has ended. I won't check back in until Sunday. I am the only one who can do my work. If I'm not OK, all of the other things that I'm sacrificing for won't matter.” This also includes avoiding the email overwhelm. Cottom said she limits herself to an hour spent on email each day. Her downtime revolves around cooking, good coffee, volunteering, listening to roots music, yoga and reading.

Looking toward the future with optimism

When prompted to share some recent great reads, Cottom acknowledged a love of genre fiction. She cited Smart Bitches, Trashy Books (a community of romance readers who also happen to hold a lot of Ph.D.s) as a fun pastime. Another of Cottom's latest reads with a decidedly more serious tone is Racecraft: The Soul of Inequality in American Life by Karen E. Fields.

In addition to her upcoming book projects, the future holds for Cottom more sociological work, continued service to her campus and students, and maybe even a yoga teacher training. When prompted about the possibility of colleges expanding requirements for students to take a sociology course as a response to racial injustice, Cottom thinks bigger. “I want to start earlier,” she said. “I want K–12 sociology.” From there, Cottom wondered aloud about bringing yoga to more black women, envisioning what she called “a yoga for the people.”

True to form, Cottom concluded her vision for the future with optimism in service of others. Of her ideal future, she stated, “I'm absolutely doing this job. I hope I'm always talking to students. I just think that's the best.” What's her best advice to fellow women in higher education? “Find someone who is doing the work you want to do and emulate them.”

For those still seeking a role model to follow, Tressie McMillan Cottom is as good as they get.