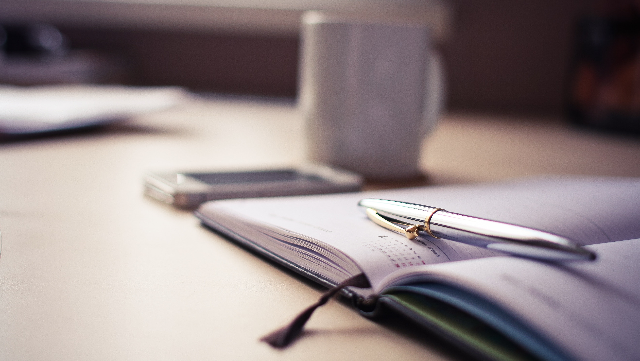 In late 2018, I had to stow away my pink planner in a place I couldn't actually see it. I had to remove it from my office, and it's now lost in my house. This might seem strange, especially to those of you who live by what's in your planner.

The purpose of planners is to keep us on schedule (and task), so we can plan. (The goal is right there in the name.) I like to be organized because I like to control what I can. My planner is where I keep track of all deadlines, public speaking events, the breakdown of larger writing projects, appointments, coffee dates and lunches, and our family schedule.

My planner is a tool that is supposed to help, not hinder.

Last year, it hindered more than it helped because I started using my planner to track how productive I was. I started penciling in how many words I wrote, what I edited and which of my assignments were finished. Each day, I penned my progress to quantify my work. I could see when I succeeded or fell short. Each day brought another judgment about my career and lack of accomplishments.

At the end of the week, I would evaluate my progress. I wielded that knowledge like a sword. Some weeks, I was victorious, a warrior with words. Other weeks, I failed and cut myself to the the bone.

I liked to imagine myself as productive. Productivity, I assumed, was good for my work life. There's always something else to do and some deadline to meet, and I prided myself on the ability to produce. Insidiously, productivity became the metric to judge not only my accomplishments, but also my self‐worth. What I was able to produce became crucial, mattering more than other things. And not being productive didn't seem like an option.

By the end of the month, I would self‐assess and usually decide that I wasn't living up to my true potential. I pushed myself harder. My worth was being determined by word counts and bylines.

Being productive became what mattered most, even as I knew it was a trap.

The Impulse to Produce More

It was an academic mindset—that I thought I removed myself from—rearing its ugly head again. Academia, like a lot of workplaces, puts a premium on productivity. There are more articles to write, more books to review, more collections to put together, more books to finish, more panels and conferences to organize, more students to teach and advise and more lines to put on your CV or résumé. More, more, more. Produce, produce, produce.

Documenting your productivity is baked into the system. Your worth is bound to what you produce, hiring and promotion all resting on what you can accomplish. That pressure is ratcheted up by a tough, often impossible job market; the overreliance on contingent workers at universities and colleges; and the burgeoning gig economy. We imagine that if we can just produce more, maybe, just maybe, we can secure a permanent job—a job likely centered on productivity.

The more pressure I applied, the less I actually got done and the worse I felt about myself. My planner was riddled with blank spaces. I found myself incapable of focusing, dreading work, getting angry (but in not constructive ways), fatigued but unable to sleep, and remarkably detached and unable to make choices, with headaches cropping up frequently. With an iron will, I forced myself to do all the work required of me but nothing more.

My focus on productivity was a problem, which made me more anxious than I already am on any given day. I worried that I was depressed again. I wasn't. I was burned out; I had all of the symptoms, which are similar to depression. Every time I criticized myself for a lack of productivity, the symptoms became more pronounced.

Thus, I “lost” my planner, started giving myself some slack, gave myself permission to forget about being productive and pushed deadlines for two book projects. I even took a vacation and enjoyed it because I decided to ignore all the work I thought I should be doing. I ignored that unrelenting urge to be productive. I'm attempting to separate my sense of self from how much I write and edit and making some progress.

I also returned to one of my favorite cartoons by Matthew Inman of The Oatmeal on creativity. He compares creativity to breathing, the inhale and exhale. As you create, “you're exhaling.” Producing, then, is the exhale. Inhaling is the process by which we bolster our creativity and work by taking things in. My obsession with being productive was a long exhale without catching my breath; it's no wonder I was burned out. He writes, “[Y]ou can't exhale forever. Eventually, you have to breathe in.” Or you'll be like his cartoon character, flat on the ground with X's over your eyes. And you don't want to be.

In the push to be productive, we forget to inhale and our work suffers, and so do our lives. So, let's remember to inhale rather than exhale all the time.

Stop and take a breath with me.